You are here: Home / Interviews With Authors / Interview with Author – Ryan Parmenter @RyanCParmenter 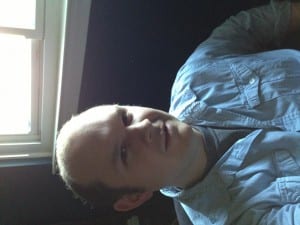 Author Bio:
Ryan Parmenter began writing in elementary school, to begrudgingly fulfill the required daily journal quotas. A typical conclusion to an entry read: “There, 3/4 of a page. Are you happy?”

As he graduated from the University of Michigan with an English degree (which degrees, he likes to joke, can be found on rolls next to the toilet), he began musical jamming with friends, which led to the founding of the progressive band Eyestrings. Eyestrings played Metro Detroit venues and found some fans in the eastern United States, playing the first Rites of Spring festival in Phoenixville, Pennsylvania in 2005, and twice playing Orion Studios in Baltimore, Maryland. Eyestrings released the albums “Burdened Hands” (2004) and “Consumption” (2005).

The band broke up and Ryan turned back to prose, completing his first (and yet unpublished) novel “Hole Filler” in 2007.

Ryan released the solo albums “The Noble Knave” (2006) and “Sad Men” (2009). He joined the Second City improvisation training program, graduating from the Second City Conservatory program in 2009 along with the woman who would become his wife. Ryan performed as an improviser and wrote and performed in original stage shows, including the bizarre variety show “Shim & D’rothy” (2009, again with his future wife) and the one-man character revue, “Jerks” (2011) at Go Comedy in Ferndale, Michigan. He has played live music as part of the trio JRS since 2010. Ryan also wrote the musical score for the satirical “RoboCop: The Musical,” which had two successful runs at Go Comedy.

In 2010, Ryan began writing what became “Hyperbole,” a novel exploring themes such as terrorism, divorce, suicide, meaningless employment, relationship fidelity, and happiness. He e-published the novel in 2012 along with a 7-song album, “Hyperbole: The Original Novel Soundtrack,” based upon song titles mentioned throughout the novel. Ryan then produced and recorded the audiobook version of the novel.

In 2013, “Hyperbole” got its first print release under the imprint Rype, along with the audiobook and e-book.

What inspires you to write?
I’m inspired by the apparent madness that comes with being human. Hypocrites, comedians, politicians, religion, stock traders. People are out of their minds. It’s fun for me to find new contexts for madness.

Tell us about your writing process.
I get an idea that seems like The Big Idea. I write about ten pages right away and then get distracted. The dog needs to be fed, or I have to pay bills. Several months later, I might recall that I had something worth writing. I’ll dig it up and try to remember what I was thinking. I never will. Then I’ll do my best to remember what it was and form a story, and a year and a half later, maybe there’s a draft of a novel.

In between that, I drink a lot and go to my day job and spend time with my wife and see my friends on weekends.

How did you decide how to publish your books?
I thought “Hyperbole” was good enough to publish. I’d written one novel before, which I may revisit and see if I can craft into something publishable. But that takes time away from writing new stuff, so we’ll see.

What do you think about the future of book publishing?
“Book” is going to be an abstract term where it was once fairly concrete. That’s OK. We’ll adapt.