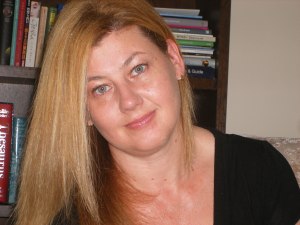 About Renae Lucas-Hall:
Renae Lucas-Hall is an Australian-born British novelist and writer. Renae spent many years studying French, Italian and Japanese because she loves languages and she always wanted to be an interpreter, a teacher or a writer. Renae graduated from Monash University in Australia with a Bachelor’s degree in Japanese language and culture before living and working in Tokyo for two years. Renae has continued to work with the Japanese for many years in Japan, Australia and the United Kingdom. Renae has also completed an Advanced Diploma of Business Marketing at RMIT in Melbourne and at the University of Gloucestershire in the UK. Over the past twenty years, Renae has enjoyed visiting Japan many times for work or as a tourist and these days she continues to love reading and writing anything and everything about Japan. Renae lives in the Cotswolds in the United Kingdom with her husband and their Siberian husky.

Renae Lucas-Hall’s first novel “Tokyo Hearts: A Japanese Love Story” was published in 2012. Her second book “Tokyo Tales: A Collection of Japanese Short Stories” was released in June 2014. Renae is currently writing her third book called “Tokyo Dreams” – this is the sequel to “Tokyo Hearts”.

What inspires you to write?
My love of Japan and the Japanese culture as well as the wonderful books I’ve read by so many great authors.

Tell us about your writing process.
I usually write my stories by hand. Later I’ll type up each short story or chapter on my PC and then edit this over and over again until I’m happy for it to be published.

For Fiction Writers: Do you listen (or talk to) to your characters?
I never listen or talk with my characters. I have a picture of my characters in my mind. I try and have some fun when I develop them by giving them interesting or quirky physical and emotional characteristics before I start writing about them.

What advice would you give other writers?
Read whenever you can and write as much as you can and your writing will improve.

How did you decide how to publish your books?
I knew I had a market for my books, I wanted to decide on my own covers and write my stories without being pushed in directions I didn’t want to go by a demanding agent so I steered clear of agents and traditional publishers.

What do you think about the future of book publishing?
I think there is always a future for book publishing because the enjoyment people get from reading is so strong and once you discover this joy you’ll never give it up. This joy will be passed from one generation to the next. There will always be those who like to read printed paperbacks and those who prefer to read on digital formats – I don’t believe that either form of reading will die out, although certain genres will be more popular than others at different points in time.

What genres do you write?: Young Adult, Romance, Action, Adventure