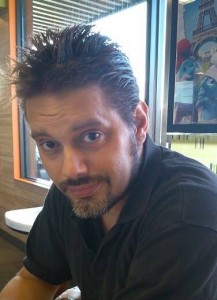 About Paul J. Fleming:
I have always been a fan of the classic pulp science fiction genre, by which I am referring to the ‘Buster’ Crabbe Flash Gordon and Buck Rogers series. Ray guns and Rocket ships – no profanity, eroticism or hard hitting social messages which seem to pervade current entertainment. Just nice, entertaining romps into a fantastical future to entertain the brain cells for a while!

In short I wanted to write a tale which my eldest daughter (who at time of writing this is 14) could pick up and read, or could tell her friends about and suggest they read it, without any form of censorship but which would also appeal to a wider audience too.

Does this make it a ‘children’s book’? Absolutely not.
There’s political schemes, dastardly plots and undertones of larger topics such as how the different colonies interact, the rampant commercialism and much more – but I’ve tried to put it in a form which means you can take from it what you wish. If you want a deep meaningful exploration of the socio-political worlds of the 23rd Century then go for it! if you just want misadventure and people trying to survive against a backdrop of a solar system in turmoil, laser pistols firing, defeating maniacal robots and foiling plots of evil-doers then again be my guest.

The main point is I am just writing stories which entertain and amuse my tiny grey cells. I’m not trying to write ‘like anyone’ or claiming to be a proficient author of top notch epic tales. I just write what I like and how I like.
If people read the stories and enjoy the tales I weave, then that’s fantastic – it really does make my day.

What inspires you to write?
I’ve always been a great fan of Sci-Fi shows (Doctor Who, Blake’s 7, Space 1999, Firefly, Buck Rogers, etc.) and films such as Star Wars, Flash Gordon and Star Trek, finding myself trying to deduce outcomes from ‘end of show cliff-hangers’ or imagineering new fantastical tales with well known and established characters.

I mention Doctor Who above, and I include the novelised versions of the episodes too – as well as the wide spectrum of other adventures – which were relished alongside epic adventure tales such as ‘The Mote in God’s Eye’. These books painted vivid pictures in the canvas of my mind, bringing characters to life within my imagination and (in essence) training my way of thinking to imagineer my own worlds, characters and depictions.

In short, I’ve always scribbled out little stories, or parts of adventures – as well as crafting adventures for players in the numerous role-play games I used to run for people. It just made sense to take that process to the next level and put those stories into book form.

Tell us about your writing process.
I used to run role play games for groups of eager adventurers, sometimes in the horror/suspense genre but mostly within the science fiction setting of space – Buck Rogers, Firefly, Star Trek RPGs – but unlike other GM’s I know, I tended to be always pushed for time and running late, so preparation seemed to fall by the wayside, forcing me to play-it-by-ear and come up with stuff on the spot.
I saw one GM with Folders of notes, adventures, characters and plotlines. He was fantastic, but for me it seemed a little restrictive, as if the flexibility he portrayed was only as far as his preparations would allow. I cannot fault his adventures, as they were enjoyed immensely, but it was not the way for me.
Characters which players invented in my games did unusual and unexpected things, and adventures quite often took on whole new avenues of exploration – quite often with amusing happenings along the way – but always conceived on the fly in reaction to the players and what they were doing. I just had an idea of what was to happen, and they essentially wrote out the adventure with me as a referee!
It’s very much the same in my writing. I have an idea, a spark of inspiration from something I see or hear, and then I begin to imagine the characters doing things, talking to each other and getting into scrapes. That’s where it starts…..

I genuinely have no idea (sometimes) where they are going or how they get out of trouble!

For Fiction Writers: Do you listen (or talk to) to your characters?
Yes. All the time. It’s as if I am seeing the action in that little cinema screen in my head, with the dialogue rapidly passing between characters, and it’s my job to try and scribe it down as quickly as possible.

Writing and typing were a bit slow, so I’ve trained my dictation software rigorously so I can just sit back and close my eyes, talking along with the action and describing what I see in order to put it down on (electronic) paper!
Sometimes I do chastise the characters – they do take me into ‘dead ends’ from time to time. Other times, they seem to mill about and not do much. However, when they start going, I just have to try and keep up.

What advice would you give other writers?
Write. Scribble. Note down ideas and plot-lines as they pop into your head. Watch people in everyday life, as sometimes a quirk, mannerism or just appearance may make it into a character in your new world.

Above all, write the story for yourself. Don’t write it for X audience or Y market. Write a story you like, that makes you smile at the amusing bits, or be concerned at the tricky situations. Enjoy yourself and write a damned good yarn.

Edit and revise later – plenty of time for that. Just write!

How did you decide how to publish your books?
I wanted to put my stories out there in the hands of readers, but not have to pay out a fortune to do so.
Quite simply, I was writing my own little Tales and initially thought of just putting them on my website for people to read, but obviously the growth in the e-reader market made it more sense to put them in e-book format so that people could read them on a much more portable medium.

Initially I went with Amazon – for the same reason everyone else goes with them, they’re huge and have the tools and distribution to help me achieve my goal.
Since then I have discovered draft2digital, which allows me to expand my titles into other markets too – such as iBooks, Nook and Kobo. I’m doing this with the smaller titles, but the larger main title is within Amazon’s Select programme, which means exclusivity and no publishing outside their system.

What do you think about the future of book publishing?
People will always like printed books – they will still exist, so it is a good idea to add hardcopy versions to your offerings, but look at your target audience and also other titles such as your own which are already on the market. How are they offering their stories? E-reader? Print? Audio? With the tools available from Amazon (not promoting them, but simply using this to make the point) you can publish your stories in print through Createspace, E-Book through KDP and also in Audio through ACX.

It provides choice for readers, so they can have the story in their preferred format. After all, Amazon are driving ahead with opening bricks and mortar book stores once more – so that alone should prove that print media is not dead, simply another avenue in which to present your stories.

What genres do you write?: Science Fiction