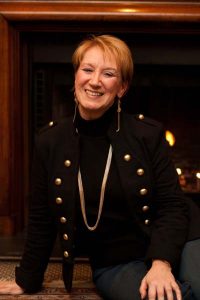 About PatriciaBarletta:
I've always wanted to be a writer. That was right after I realized that becoming a fairy ballerina or a princess wasn't going to happen. But being a writer meant I could go places in my head and be other people as much as I wanted. I could even be a fairy ballerina or a princess! My stories have always had romance and history in them. I feel that one sparks the other. I'm not sure I'd really want to live in the past with no running water, take-out menus, flush toilets, hair dryers or antibiotics, but it sure is fun to dream. Besides, swashbuckling pirates and Regency men in their tight, buckskin breeches are hot.

I'm a native of the Boston area. Its history has inspired my writing, and probably influenced my decision to become a high school British Literature teacher so I could pay the bills. I've also been an accounts receivable clerk, a receptionist and telephone operator (before cell phones), head of an elementary school library, and president of a food pantry, not in that order. Long ago, I published three historical romances in another life where I called myself Amy Christopher. I received a Master of Fine Arts in Creative Writing degree in Popular Fiction at the fabulous Stonecoast program in Maine, where I met many talented writers, who encouraged me and made my writing better. And now I'm an author writing about dark heroes, feisty heroines, magic, and other fantastical things.

What inspires you to write?
I'm inspired by history. When I tour historical sites, I often will imagine characters involved in the events that occurred there. I wonder how they might have reacted to something that happened there, or maybe why they might have been there in the first place. The atmosphere of a town or city might give me an idea for a plot or maybe just a scene. But at the core of my writing are the characters and the story they want to tell.

Tell us about your writing process.
I'm a pantser. I don't usually write out a plot or summary of my stories. I know how the story will end, and I know who my characters are. Sometimes I'll write a character sketch in the character's voice. But getting from that opening scene or the scene where my hero and heroine meet is as much of an adventure for me as it is for them. Even though I know who my characters are, sometimes I'll learn things about them that I didn't know when I started the story.

Because I write historical romances, the time and setting influence how my characters act and interact. For instance, if one character wants to warn another character who is miles away that she's in trouble, he can't call her on his cell phone. So he might jump on his horse and gallop the five miles to get to her. This creates tension. Will he get there in time? Will she realize the danger? Putting myself in the past makes me think differently and forces me to be more creative.

For Fiction Writers: Do you listen (or talk to) to your characters?
I don't talk to my characters, but I do hear them in my head. I can hear their voices and the cadence of their speech. I also see them within the scene I'm writing as if I was watching a movie. All I have to do is record what I'm seeing, which sounds easy, but really isn't because sometimes a lot is going on in that scene. So my characters slap me up the side of the head and tell me to stay focused on them.

What advice would you give other writers?
Read. Read everything, not just the genre you want to write. Be a sponge. Observe how other writers tell their stories. Learn the rules of story-telling so they are part of you, then throw them out the window and write the story you want to write. Keep writing. The best way to learn is practice.

How did you decide how to publish your books?
I knew I didn't want to self-publish because I didn't want to deal with everything that I would have to do to make a book, like the cover art and formatting and all the other little details. I just wanted to write my stories. I was fortunate to find my editor at Lachesis Publishing who was enthusiastic about my book.

Deciding to self-publish or not is a very personal decision. Publishing with a publishing house requires writing query letters and synopses and frequently submitting to and finding an agent first. Self-publishing doesn't require that, but you still need to find a good cover artist and a content editor as well as a copy editor. Chatting with both self-published and traditionally published authors is a good way to help you decide which route to take.

What do you think about the future of book publishing?
Now that ebooks have arrived, I don't think they'll ever go away, at least not until someone invents some other new way to read. But I think print books are here to stay as well. While ebooks will probably continue to be more popular with some genres, I think others and particularly non-fiction will continue to be more popular in print. Many people still like the feel of a physical book in their hands.