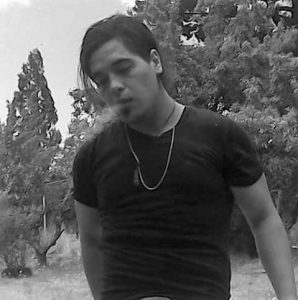 About P Harrison:
Born on the 7th of February 1991 in Gisborne, New Zealand, Lord. P Harrison grew up on the eastern coast of New Zealand. From a very young age, Lord Harrison was a lot different than most children, showing a keen interest in Astronomy, Astrology, Poetry, Elite truth, Aliens, nature & the well being of our home planet all at the age of 5.

Lord Harrison, now aged 26, is the youngest twin of he and his twin brother. He also has an older sister of 2 years that played the role of his father. Harrison's mother raised Lord Harrison, his twin brother and sister solely until around 2002, which was when she moved to Palmerston North, New Zealand to pursue her studies in music.
Harrison and his siblings were given to Harrison's grandmother who raised all 3 siblings for at least 10+ years.

For a long period of time, Lord Harrison ended up looking after his grandmother due to her age & health. Harrison claims that there was no question or second thought when he chose to give up a life of freedom to tend to his grandmother. Harrison still resides with her to this day (apart from business trips etc.).

Two interests that Lord. P Harrison took to the most in his teen years was media & music. Harrison would spend countless studying the art of film production. This included the functions of cameras, editing, story boards, and script writing.

Around 2006 – 2009, Harrison, along with two other friends, decided to create their own t.v show called "Crazy Town Boys" which would catch the attention of ALT T.V, C4 & MTV NZ/ AUS. However, due to personal issues, Harrison was left on his own & the t.v show never went ahead. Also, ALT TV had closed down right before Harrison was to sign a t.v show production deal.

When Harrison turned 18 years old, his mother's sister & partner took him to live with them in Wellington, NZ. Before & after this time, Harrison also showed a very keen interest in professional wrestling. This lead to his auntie taking him to a professional wrestling school, but again, like many other things Harrison attempted, it was a no-go.

As for music, it naturally runs in Harrison's blood & DNA. The Harrison family are very well known for being a musical family. Harrison's auntie, whom he lived with in Wellington, as well as Harrison's mother, both are professional and qualified musicians Lord Harrison himself has also built a name in the music scene, catching the attention of both Universal Music NZ & Sony Music NZ. Harrison also has a track record for music composition in the genres of pop, hip-hop, rock, heavy metal and acoustic.

Again, Harrison never went forward with his music due to a drug and alcohol binge.
.
MENTAL HEALTH:

At the age of 18, Lord Harrison was officially diagnosed with the following illnesses:

Lord Harrison was a very reserved child, which continued throughout his teen years & his early adulthood. At the age of 18, Harrison was sent to a mental institution in Wellington, NZ after he went on a "mental killing spree" with a heavy duty divers knife, looking to attack anyone in his sight. This lead him to going to his local police station & attempting to stab & kill numerous police officers. Harrison however gave the knife over to the police & his social workers & a professor were called immediately. Harrison was discharged after only a week in the mental institution which was suppose to last for 2 weeks at the least, and months at the most.

Harrison remains diagnosed to this day.

Harrison was a late bloomer when it came to alcohol and drugs. It was when he returned from the mental institution that he decided to pick up drugs & alcohol. It is said that marijuana was his first choice. Sources & family members say that, Harrison's friend whom he created the t.v show with in his teen years, introduced Harrison to consuming marijuana, though Harrison already had experience in the field of growing & dealing the plant. This consumption of marijuana was Lord. Harrison's own choice and decision. It is said that Harrison woke one morning and felt sick of feeling "naturally sad", so he chose to visit his old friend who had left his life due to his mental health issues & asked him straight forward if he had any marijuana. To Harrison's surprise, his friend had some in his pockets. However, a week prior to this event, a favored and local police officer had visited Harrison's friend and explained to him how Harrison was feeling. This lead to Harrison's friend taking Lord. Harrison back under his wing.

As for alcohol, Harrison shared his first drink with his friend who had introduced him to smoking marijuana. However, the drinking was influenced by his twin brother, father & his twin brother's friends.

What inspires you to write?
What inspires me the most is the different life situations I face on a personal and professional basis. I have trouble expressing myself verbally, but somehow I'm able to write exactly how I feel and what I really think in great detail It's like magic to be honest!

Tell us about your writing process.
It depends on what I'm writing about. If it's something I've been through personally, I'm able to draft the whole book in my head as well as my soul. If it's a storybook, then I use the old story board method (drawing different scenes of the book with brief captions under them).
But most times, I usually sit there and really get into depth about how I currently feel. Good soothing music always helps too! You'll be surprised at what things can come to your mind when yo listen to meditation music!

What advice would you give other writers?
No matter what, NEVER LIE TO YOURSELF! What I mean by this is, if yo feel the material your writing is a bit too raw & brutal for others to read, but that's how you truly feel, then write it! That's the most important thing. Always be real and true to yourself! Many people say that, and that's because it's true!

How did you decide how to publish your books?
When I first started writing, self publishing was very financially costly. I searched all over the internet for cheap publishers, but I didn't have the money at the time. Then I decided to search for free publishers on Google. I was shocked and happy to know that there were publishers that didn't charge anything! However, with these free publishers came a price. I had to promote and market the book myself. I didn't have a problem with that though because it gave me full control of the whole process which is very important to me.