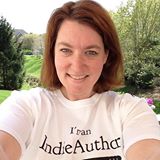 About Missy Sheldrake:
Missy Sheldrake is a fairy dreamer. She began writing Call of Kythshire in November of 2014 during NaNoWriMo and published it in March of 2015. She is an author-illustrator who grew up in Western Connecticut and has since moved to Northern Virginia in the suburbs of Washington DC. Missy is an artist as well as an author, and when she isn’t taking care of her family, she’s either walking in the woods, creating fairies out of polymer clay, painting illustrations on her iPad for her books, or of course, writing!

What inspires you to write?
I love to be outdoors in nature and feel the energy of the wind in the trees and enjoy the earthy scent of the forest. I love daydreaming about all of the magical things that might be out there that we simply are too close-minded to see. I try to take a walk every day through a nature trail by my house, and while I do, I imagine myself in fantasy garb on a quest just like my characters are. My inspiration comes from my interactions while gaming, either in online RPGs, or playing Dungeons and Dragons with my friends. In addition, I have always had a love for fairies. I find their magic and beauty inspiring, and I think it’s fascinating to imagine them hiding away, creating enchanting sights in nature that most people would overlook if they weren’t really paying attention.

Tell us about your writing process.
I’m a pantser. I only just discovered the word, but it definitely describes my process. Every morning I brew myself a pot of coffee and sit down with a hot cup and just start writing. I do a lot of rereading and making lists of plot points that still need to be explained. Right now, I’m on Chapter 27 of my latest novel and I have a list of about seven things that need to be addressed and wrapped up. I have tried outlining in the past, but my characters have minds of their own and a lot of the time they just derail me, so I let them have free reign to do what they want. Tib is especially tricky when it comes to getting his own way.

For Fiction Writers: Do you listen (or talk to) to your characters?
When I’m writing, I try to be my character. I think how they think and speak how they speak. I let their emotions get into my head. It’s usually after I’m finished with a scene and I step away that I start to talk to them. Sometimes, they really get a talking-to!

What advice would you give other writers?
I thik the biggest thing I’ve learned is to just let go and let the story tell itself. Don’t nitpick on phrasing or getting the wordy exactly right.
There have been times when I’ve written an entire chapter and the next day I scrap it and start over because it just didn’t go the way I wanted it to. Words on a page are just that. They can be deleted and rewritten if they need to be. Don’t be afraid!
Don’t worry about leaving things out. You will read and reread your manuscript so many times and edit, edit edit…so don’t get hung up on the first draft. Just keep writing!

How did you decide how to publish your books?
When I was in the second draft of Call of Kythshire, I started to weigh my options for publishing. I was seriously considering the traditional publishing route until I spoke to a friend who had self-published. She helped me weigh the pros and cons and I eventually decided that self-publishing was for me.
I wanted to spend my time writing, and the purpose of my writing is to share the stories I hold dear and want to tell. Because of the ease and speed and freedom of the process, I chose indie publishing. I’m so glad I did. There is such a sense of community within indie author circles, and I love the idea that the world of publishing is an open book – no pun intended!
traditional publishing is filled with a great deal of rejection, and while its considered prestigious by many to be published by a ‘real’ publisher, you have to relinquish a lot of control over creative decisions, and from what I understand you need to do just as much marketing either way. For me, indie publishing was a no-brainer.

What do you think about the future of book publishing?
I hope that book publishing continues to be more inclusive and widespread. There is no more bottleneck when it comes to getting your work out there. Authors have so much more freedom than they used to in the publishing industry. I think it’s amazing that authors can release pretty much any manner of work they can think up with just the click of a button. Certainly this opens the market up to sub-par quality and poorly edited works, but quality eventually rises to the top and gets recognized, so I feel that it all evens out.

What genres do you write?: Fantasy, Young Adult, Sword and Sorcery