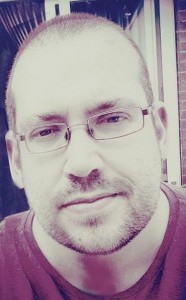 About Michael Bray:
Michael Bray is a horror / thriller author of more than ten novels. Influenced from an early age by the suspense horror of authors such as Stephen King, Richard Laymon & Brian Lumley, along with TV shows like Tales From The Crypt & The Twilight Zone, he started to work on his own fiction, and spent many years developing his style. His first book was a collection of interconnected short stories titled Dark Corners (September 2012) which was picked up immediately by Dark Hall press and received great critical acclaim. This was followed shortly after in December by a novella titled MEAT, which like its predecessor, enjoyed a string of fantastic reviews.
It was the release of his very first full length novel, a supernatural horror titled Whisper in early 2013 that saw a sharp increase in sales and popularity. The book was noticed within the horror community for its blend of psychological horror and eerie supernatural elements, and was picked up after being initially self-published by Horrific Tales publishing. The book was re-edited and rereleased in July 2013, and immediately went to the top of the overall horror charts on amazon in both the UK and US, outselling such household names as Stephen King and James Herbert. The book was nominated for a Bram Stoker award and made it as far as the final ballot for the first novel category. Two sequels to the book were produced, titled Voices (May 2014) and Echoes (August 2015) which, like the original, went on to top the charts and generate huge buzz.
Between the release of the whisper novels, Michael also penned a six book deal with Severed Press. Three books have already been released and, like Whisper are consistently big sellers worldwide – From the Deep (November 2014), Return to the Deep (January 2015) & Spawn of the Deep (July 2015). In addition, the prolific author has also released two short story collections which, like the full length novels have proved to be incredibly popular with his readers. Funhouse (October 2013) and Forgotten Fears (June 2015) went on to sell well and receive a string of positive feedback from readers.
Michael has also worked on numerous collaborations, including several very successful extreme horror titles with bestselling author Matt Shaw, their complimentary styles quickly growing a rabid fan base of readers for the works they release together (ART – March 2014 MONSTER – March 2015 Home Video – July 2015)
With books sold in over forty countries and rights optioned for movie and television adaptations of his work, he recently signed with Media Bitch literary agency where he intends to take the next step in his writing career. He currently resides in Leeds, England, with his wife Vikki and daughter Abi.

What inspires you to write?
I find myself inspired by the middle ground between good and evil. I strongly believe that no one person is ever fully good or bad. there are several shades in between which as an author I like to explore within my work. be it a flawed hero or an evil killer with redeeming qualities, I think the human capacity to drift within that murky area is interesting and is a recurring theme within my work.

Tell us about your writing process.
it depends on the type of work. for short fiction, i tend to start with the basic idea and just go with it and let it develop naturally however it wants. the process is very easy and organic. For longer fiction, I plan and plot out the novel in bullet point form chapter by chapter. Often it will deviate slightly during the actual writing process, but I like to go into a full novel knowing I have a beginning, middle and end to the story.

For Fiction Writers: Do you listen (or talk to) to your characters?
I try to take a back seat to them when i can. of course, I have an idea of where i want the story to go, but sometimes in the writing, the characters have different ideas. One of the favourite characters for readers in my best seller Whisper, was a greasy, slick character called Donovan who is a key part of the story. The odd thing is, he started out life as an incidental character initially intended only to introduce the main protagonists. As i wrote more about him and fleshed him out, I knew I wanted him to feature more and more. In the end, he became pivotal to the plot in ways i had never intended.

What advice would you give other writers?
to key things stick out in my mind. The first is write every day, even if it’s only a little. it’s important to develop a routine to it. second, keep in mind that this is a rejection based business, and as a result dealing with them is going to be part of it going forward. By no means does that mean the work is bad, it’s just not a good fit for that particular publisher. a thick skin is essential.

How did you decide how to publish your books?
I consider myself to be a hybrid author, in that I have a mixture of both traditional and self-published works out there. I have been fortunate to be allowed to make a living from my writing, and although there is a lot of debate about which is best, I think there is room enough for both types of publishing. The only think I would say, is that if you self-publish, treat it professionally. although it’s possible to do it for free, you really need to invest a little. remember, this is your work, and you will be judged on it’s quality. Pay for a good editor and cover artist. take the time to really make sure the quality of the work is the best it can be.

What do you think about the future of book publishing?
As much as I like the new digital age of kindle books, I really do love actually holding a book in my hands. I would like to see a shift back towards traditional publishing, but, unfortunately i don’t see this happening. if anything i think the digital age is here to stay.

What genres do you write?: horror, thriller, action, dystopian,extreme horror.