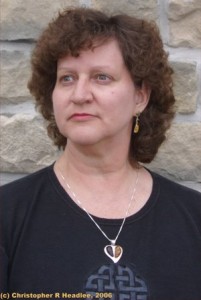 About Kim Headlee:
I live on a farm in southwestern Virginia with my family, cats, goats, Great Pyrenees goat guards, and assorted wildlife. People and creatures come and go, but the cave and the 250-year-old house ruins—the latter having been occupied as recently as the mid-twentieth century—seem to be sticking around for a while yet.

I am a Seattle native and a direct descendant of 20th-century Russian nobility. My paternal grandmother was a childhood friend of the doomed Grand Duchess Anastasia, and the romantic yet tragic story of how Babushka escaped Communist Russia with the aid of her American husband will most certainly one day fuel one of my novels. Another novel in the queue will involve my husband’s ancestor, the 7th-century proto-Viking king of the Swedish colony in Russia.

For the time being, however, I have plenty of work to do in creating my projected 8-book Arthurian series, The Dragon’s Dove Chronicles, and other novels clamoring for attention. I have been a published novelist since 1999, beginning with the first edition of Dawnflight (Sonnet Books, Simon & Schuster).

What inspires you to write?
A particularly long, vivid dream I had when I was 7 inspired me to compose its story.

I have been writing ever since.

Tell us about your writing process.
I plot by the seat of my pants. That is to say, I create a detailed synopsis of the plot, its characters, and their world, and then I give my permission to deviate from the outline as the situation warrants. Usually I do not use any special physical or software tools for this process; I create the outline in Word and then copy the relevant paragraphs to use as the starting point for each chapter, which avoids the dreaded “blank page” block.

The notable exception to this process occurred when I was working out the timeline — which involved travel backward as well as forward in time — to the master arc governing the sequel I wrote to Mark Twain’s A Connecticut Yankee in King Arthur’s Court, which I have titled King Arthur’s Sister in Washington’s Court. For this project I created a multicolored flow chart with dry-erase markers on a white board, which my husband then kindly transcribed to a PowerPoint slide and animated.

For Fiction Writers: Do you listen (or talk to) to your characters?
I do not interact with my characters.

I =become= my characters.

To do this, I employ a form of method acting to project myself into the character’s personality and situation. Sometimes this is aided by rereading a previous scene written in that character’s viewpoint, but once the character becomes truly internalized, that step is not as critical for me.

What advice would you give other writers?
Never, ever give up.

How did you decide how to publish your books?
My writing career began long before self-publishing became a gleam in anyone’s eye. As such, it took ten years almost to the day before my first novel hit the bookstores. That entailed dozens of submissions — and of course rejections — before I engaged the interest of a literary agent, and then another couple dozen rejections before he found an editor who said yes.

In 16 years, he placed exactly two books for me with New York publishers; not exactly an acquisitions record, though part of that was my fault for not being a prolific writer. After we parted ways several years ago and I ventured into that Wild and Woolly territory of self publishing, I have never looked back.

What do you think about the future of book publishing?
The biggest reason governing my decision to start creating and publishing my own e-books (and now, most of my print editions too) is that my agent and I had a disagreement about what he wanted to charge his own clients to publish their languishing titles. I believe he could sense that literary agents were becoming less and less relevant to the publishing process and wanted to diversify to protect his income stream. As a businesswoman, I could understand that move, but it wasn’t going to happen with my hard-earned $$.

Literary agents still function as the gate keepers for many of the major New York publishing houses (the notable exception is Harlequin, which as far as I know still accepts unagented submissions to most if not all of their product lines), but any writer wanting to secure representation must do his or her homework to research which titles the candidate agent has placed, and how well those titles have performed. To do anything less is to invite disappointment and even disaster.

What genres do you write?: historical, fantasy, paranormal, action-adventure, military, spiritual, satirical, political fiction — and most often several of these in the same novel