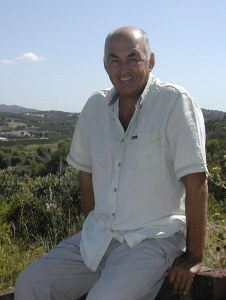 About Ken Magee:
Most folk believe that technology rules their lives. They’re wrong. Dark conspiracies and ancient magic actually dominate this planet. My one mission in life is to open people’s eyes to that fact.

My name is Ken Magee and I tell people I write contemporary fantasies which blend adventure and humour with technology and magic. My books live under the tagline ‘ancient magic meets the Internet’. I pretend that they’re works of fiction, because I’m afraid of the powerful people behind the conspiracies… I’m hoping a ‘fiction’ writer will slip under their radar.

Up until the point when I discovered about the frightening plot which deliberately caused the recent global financial meltdown, I’d led a fairly normal life. I’d worked for many years in the computer industry in roles ranging from programming through to sales. In the middle of it all, I’d served in the Naval Reserve… which was hard work, but fun. Then in 2010, I decided to make time to finish Dark Tidings, the book I’d started many years earlier (writing not reading). I would have finished it sooner, but life got in the way. It’s finished now (the book, not life).

Dark Tidings is book one of the series. The Black Conspiracy and A Darker Shade of Black complete the ‘ancient magic meets the Internet’ trilogy.

What inspires you to write?
I began writing when I was in my late teens. That’s when I started Dark Tidings, but then there was a long gap while I got a job and earned a living. I got a recurring niggle all through that period and I knew that someday I’d have to finish the book, partly just to prove to myself that I could do it. So I guess it was always a goal… and hey, I scored!

Now, I just love writing and I guess I’m inspired by the challenge of creating something which others will enjoy.

Tell us about your writing process.
I like to have the skeleton of the story mapped out and I always write the last chapter very early on. It helps keep the story on track. After that it’s just write, write, write.

For Fiction Writers: Do you listen (or talk to) to your characters?
Sometimes the characters take on a life of their own… that’s when I know the story is going well. I’ve had instances when characters who were merely bit-part players in the plan, impress me so much that I give them a bigger role… like a film extra who is so good, they end up with a speaking part. On the flip side, some characters do things which I’m not happy about… so I kill them.

How did you decide how to publish your books?
I sent the Dark Tiding’s manuscript to a few agents and publishers and was lucky to be accepted, quite quickly, by a small UK publisher called Ragged Cover Publishing. They helped me a lot with beating the book into its final shape and they made me feel that I was doing something worthwhile.

Recently, I moved the eBook versions away from the publisher and self-published them, so I could have more control over pricing and promotions. The paperback versions have stayed with the original publisher.

What do you think about the future of book publishing?
I think the eBook market will keep on growing, but I do worry about the quality of some of the books which are self-published. Poorly edited books damage the whole market. Having said that, there are some great, new writers emerging from the indie scene although the sheer number of titles now available make it very difficult for an unknown author to get noticed.

Paper books will always have a following (like vinyl records). I, for one, love settling down with a real book and a cup of coffee… with one of my old LPs playing in the background.

What genres do you write?: Fantasy, adventure, humor