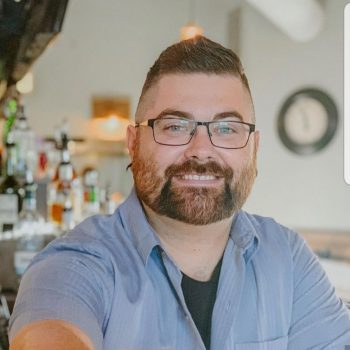 About J.M. Lively:
Jonathon Lively (J.M. Lively) was born and raised in California. After moving through several cities and states he settled down in Grand Forks, North Dakota. There, he met his wife Brittany, and together they started a family. Over the years of moving, attempting to be an artist, and living life by the seed of his pants, Jonathon collected pages upon pages of inspiration for characters. He was heavily influenced by comics, anime, and manga. A lot of those ideas were meant to be drawn, tattooed, or designed with computer graphics. Instead, he took those characters and small snippets of story and combined them all into one HUGE document. It took Jonathon three months in 2018 to comb through all the information but when he was done, he had an outline for the series, The Oreniah Codex. From there, he started writing the story. Then, in August of 2019, he published his first book, The Last Soul. Now, Jonathon lives in Bemidji, Minnesota with his family and continues to explore the universe of Oreniah, through writing novels.

What inspires you to write?
I like to let life inspire me in general. I take everyday situations and exaggerate them to suit a fantasy novel. Now, I think most authors do that. For me, what really gets my engine firing, is seeing a scene in a movie, anime, comic, etc. that is totally badass. I love writing fight scenes. I will then adapt a really cool moment to a character it suits and build around that second in time. Often, I will go into a new chapter with no idea how the story will get to the fight. So, I write the fight first, see where it travels (if at all), what gets destroyed, and let the characters come up with their own motivations in the moment.

Tell us about your writing process.
As mentioned above, I love writing fight scenes. For my first book, I basically wrote all the cool chapters with the epic battles first. Then, I backtracked and filled in the spaces that needed to be filled. Once those spaces were filled and the story made a semblance of sense, I start work on the second draft. I am highly critical of my story at this point because now it needs to be cohesive. Sometimes, whole chapters and sections get rewritten to make more sense. Once that is complete, its time to start my third draft. This is my “sense” draft. Basically, I am constantly thinking, “Can the reader see themselves in this part of the story? Can they smell the food, can they feel how cold it is, does their ankle hurt from a previous encounter?” I keep that thought process all the way through my third draft. Then, my “fourth draft” if you can call it that, is just a reread. Making sure that I did not screw up the cohesion in my third draft. Once those drafts are complete, I move onto editing. My first book had a lot of editing mistakes so, I am working on that. I never claimed to be an excellent writer. Just a highly creative person!
As far as outlining goes, I have my whole universe outlined. However, I only refer to it as a guideline. I felt that following a strict set of bullet points suffocated my creativity and drive to write. Even if I made those bullet points myself. My universe’s guideline is about twenty-three pages long. My current WIP has an outline of about eleven pages.

For Fiction Writers: Do you listen (or talk to) to your characters?
Absolutely. These characters are in my dreams every single night. Sometimes, as the day is progressing in normal life, I catch myself wondering how they would react to the situation and often, it impacts how I respond. This may sound a little crazy, I have never put it into words until now. But I have been in at least one or two situations where I was focused on writing a villain, and it impacted how I wanted to behave in real life. I had to willfully stop myself from doing something stupid. I tend to focus on character arcs more than story arcs. In my current WIP, I am exploring a slightly different writing process. I am writing each of the character’s POV all the way through before trying to merge any of it into a story that works as a whole. Sometimes, if I am focused on writing a female protagonist, I simply cannot get into a mindset of writing my male antagonist soon after. And by soon after, I mean days or weeks. It was a struggle I had with my first book. I was extremely self-conscious that my characters did not feel separate, that they all had the same tone, and that they were all vaguely motivated by the same thing. It gave me anxiety.

What advice would you give other writers?
The advice I will give is the same that I received from Dakota Krout. He was a mentor for me in my first book and without his help, I am not sure if I would have finished the book. Just write. That’s it. Just write. That is vague I know. But for me, it meant two things. First, when you do not know what to write or have writers block. Write something. Anything. Writing something, is better than writing nothing. And once you get the ball rolling, you’ll come back to your WIP, I promise. Second, do not edit your WIP to death. When you are in the zone, when you cannot type fast enough, and the ideas are just rolling out of you, write without stopping. Do not fix those red typos, ignore those blue grammar mistakes, just keep going. You can get all that when you move into your next draft or start editing. Sometimes, if I have writers block, I will review my previous chapter to get back into the zone. In doing so, I will edit a lot of that stuff out at that point. But do not do it in the moment. Just write.

How did you decide how to publish your books?
I decided on the self-publishing route mostly because of advice from Dakota Krout. Advice that I still find valid. There are pros and cons to going either way but, in my opinion, the pros for self-publishing outweigh the cons. Basically, if you self-publish, you have control of your material and the margins for income potential are much, much higher. Not to mention, getting picked up by a publisher is extremely difficult, especially for a first-time author. I can’t remember the exact number, but I believe J.K. Rowling went to over two-hundred publishers before she was picked up. On the flip side, if you have the opportunity or are set on getting published, you have a better chance of reaching more people. Publishing houses will market your book and put it in front of more people easier than you probably could. Plus, they are already established and have a reader base. Being self-published adds a lot more on your plate but the biggest hurdle, is marketing your book. And believe me, I am still struggling with that.

What do you think about the future of book publishing?
I think that self-publishing will become more and more popular. However, now that being an author is much more attainable with the self-publishing boom, the same can be said for small publishing houses. Social medial and websites like Amazon and Ingram Spark completely changed the game. I have seen several moderately successful authors join under a small publishing house and find a lot of success. Getting in on the ground floor of something like that is awesome. Of course, the members of such a thing must try hard to provide products that their readers want. But so do authors. A small business can be hugely successful with a yearly revenue under one-million dollars. While at the same time, a corporate business that clears hundreds of millions a year can be failing. With larger outfits, comes more and more expenses. I genuinely believe there is a fine line of going too big and overextending. Starting as a sole proprietor and going the self-publishing route seems like the most financially responsible thing to do.

What genres do you write?: Epic Fantasy