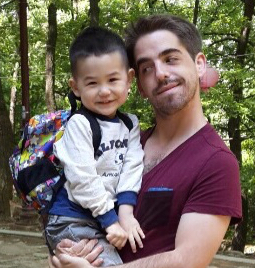 About Ian James:
I was born in New York City, but my family moved to Maine when I was six, and I graduated from Hampshire College in Massachusetts and not New Hampshire in 2009, just as the world economy was in free fall. Bitten by the travel bug after a two-week family jaunt in Italy a few years earlier, I decided to explore the planet, and after two months of job-hunting I found myself gawping at a public school classroom in Busan, South Korea, surrounded by thirty shrieking kids who were dancing on their desks and sticking their fingers up each others’ anuses.

I was a spoiled and naive scion of middle America, and meeting reality head-on in South Korea almost did me in. After a few months of culture shock a sudden bout of gastroenteritis sent me to the hospital for a weekend of hell, after which I called my mom in tears and told her I couldn’t bear the idea of riding the subway back to my lonely three-meter square apartment–complete with an amazing view of other cement apartment buildings–and that I was coming home. She said I should take a taxi instead, and so I did.

Things improved. I took a vacation in Indochina, met my wife in Busan, and wound up getting hitched six and not nine months before the birth of our first son, Harry Ulysses, who was followed several years later by his brother, Theo David, whom we affectionately refer to as Monster Number Two. By some miracle I got a job as a professor at one of the top Korean universities, even though I don’t have an advanced degree, which must mean I’m one of the youngest and least-qualified professors on Earth. After a lifetime of writing I started publishing ebooks on amazon.com. I love the art of storytelling, of exploring and exposing strange new worlds. I also take pictures, play guitar, and run, but since my kids are still pretty small I spend most of my time making sure they don’t grow up into dweebs.

What inspires you to write?
When I was a kid I was inspired by Star Wars, Star Trek, playing with legos, and reading bits of classics, like Anna Karenina or A Tale Of Two Cities. I’ve been writing for a few hours a day almost every day for fifteen years, so inspiration is really automatic at this point—I get up in the morning, read, drink some coffee, and write. Writing is a habit, as is inspiration, though if I get blocked I find that just walking around for a bit—even in my living room—will probably solve the problem very quickly. I’m also inspired by the books I read, which are a mix of highbrow classics like Flaubert and Joyce as well as sci-fi classics, also known as “anything good”. Movies help, as do my numerous daily bizarre experiences, but I guess it’s hard to say what inspires me if I’m talking to someone who isn’t an artist—in a way, and I hate to say this, I feel like some people have the urge to create, and some people don’t, and if you’re one of those people who wants to create, well, then, sorry website, but you should get some internet blocking software like Freedom and get cracking.

Tell us about your writing process.
I outline extensively, don’t follow the outlines, then outline again, don’t follow my outline, and on, and on. I find it helps me a lot if I know where I’m going with things—I want everything in my stories to link up together and lead to something, to matter.

For Fiction Writers: Do you listen (or talk to) to your characters?
I don’t talk with my characters, and I had no idea people did such things. I do feel sorry to let them go when I’m finished writing about them and I also miss them if I haven’t written about them in awhile.

What advice would you give other writers?
Don’t stop until you succeed.

How did you decide how to publish your books?
I don’t know why, I’ve always wanted to be famous. I guess everyone wants that (and then if they actually become famous, they apparently regret it), but I actually seriously pursue it—I make a fool of myself, not by singing on American Idol or by auditioning for bit roles in L.A., but by punching up books and submitting them to agents and amazon.com.

What do you think about the future of book publishing?
An e-reader will come along that feels and even smells just like a real book, the kind of perfect old books you get at book sales, a device that’s only capable of reading books—any book ever published for free—and which doesn’t allow you to waste time on the internet. Authors will no longer make money because everyone will be living in a utopia where we all have everything we need (guaranteed minimum income), but people will still be able to get famous by creating beautiful works of art. Libraries will be like museums; maybe you won’t be able to touch anything, but you will be able to wander around and browse, and if you find something that looks interesting you can find it on your e-reader.