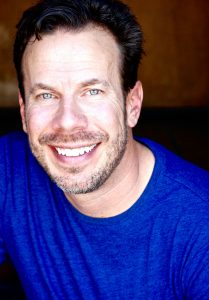 About G. Brian Benson:
G. Brian Benson is a writer, filmmaker, actor, TEDx speaker, multiple award-winning self-help author, poet, children’s author, radio personality, finisher of over 50 triathlons (including 4 Ironman distance races), cross-country bicyclist and someone that believes in waking people up!
<p>Brian has authored “Brian’s List – 26 1/2 Easy To Use Ideas on How to Live A Fun, Balanced, Healthy Life!” Which was the winner of a 2009 Next Generation Indie Book Award in the Self-Help category. Brian also wrote “Finding Your Voice” which was an award-winning Finalist in both the 2013 USA Book News and the Indie Excellence Book Awards. His children’s book “Steve the Alien” is slated to release October of 2016.
In addition to acting in TV and film, Brian enjoys creating his own projects that carry inspiring, positive and conscious messages. He just released a short film called “Searching for Happiness”, which is now available to watch via his website and on YouTube.
<p>In 2011 Brian created Guitar Man, a movie project that he wrote, produced and acted in that was filmed in downtown Reno, Nevada. Brian wrote the movie with the idea of sharing the messages ‘that we all have a lot in common’ and ‘that our true gifts reside within ourselves.’ Guitar Man was well received and was accepted to 11 movie festivals and was a winner at the Love Unlimited Film and Art Festival, won an honorable mention prize in the narrative short category at the 2011 Los Angeles Movie Awards as well as a Golden Reel Award from the Nevada Film Festival.
Brian originally from Salem, Oregon now resides in Los Angeles, CA.

What inspires you to write?
I am inspired to create and produce conscious (positive and thought provoking) media and writing is one avenue for me to be able to share.

Tell us about your writing process.
I write when I am inspired to write. I will get an idea or an intuitive hit and usually it just pours out. Sometimes I get my ideas when I am hiking or exercising. I will either jot down some notes on a pad of paper or email myself a voice message with the idea and then clean it up later that day. Those ideas can blossom into many things for me…blogs, outline of a book, short film idea, children’s story or poem. I am usually not one that sits and grinds something out in hopes of creating something.

What advice would you give other writers?
Everyone’s method is different…but staying in balance has really helped me in my own creative process. It’s no accident that my first book was on a whole bunch of ways to stay in balance. As I became busier…staying in balance became my rock…and my platform for allowing creativity to flow through me. I am not very creative when I am tired or out of balance.

How did you decide how to publish your books?
When I wrote my first book…I just followed my intuition and jumped right in. I had no experience as a writer and certainly not as an author but I felt like I was supposed to self-publish so I did. It worked out well for me. I found a printer, an editor, a layout person and someone to design my cover. I just made it happen and it was a good first step for me.

What do you think about the future of book publishing?
Obviously it seems like it is heading digitally…but I would much rather hold an old fashioned book in my hand than an Ebook 🙂