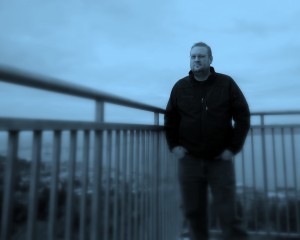 Author Bio:
Dannal J. Newman has more fun than should be allowed writing The Trying Tales of Chumbles & Grim. He has been writing fiction and studying the craft of writing for at least twenty years, and he loves reading all kinds of adventuresome and mysterious fiction.

Dannal currently lives in southern Oregon with his wife and two kids, where he works in Television.

What inspires you to write?
There is a driving force inside me, urging me to write. It showed up around the time shortly after high school when I said to myself, “Wouldn’t it be awesome to write books and get them published?” That burning desire has been there every day, even during the years I spent not writing because I was too busy, didn’t feel like it, or I was worried that my writing wouldn’t be perfect enough.

The idea of creating unique characters, making them real in my own mind, and then allowing them to drive the events of a story is really incredible and inspiring to me. An author can create something from nothing, putting words on paper to create something magical; something that can make a reader laugh, make them angry, or even to bring tears to their eyes. That is truly inspiring.

Tell us about your writing process.
When I first started writing I used to have a very regimented routine. I would write every day at the same time, and I would write for a certain, set length of time; something like an hour and a half or two hours. This was a good way to get a long piece of fiction written, by breaking it down into bite-sized pieces.

But my current technique is far different. Since I have started writing The Trying Tales of Chumbles & Grim series of novelettes, the short length of each story (somewhere in the 9,000 to 12,500 word range) has caused me to approach the stories with a voracious appetite for finishing them. I will attack a story, writing for as much as nine or ten hours at a time, often finishing a story in less than a week. I edit each story thoroughly before sending it off to my editor for final scrutiny.

The turning point in my method, and the thing that made me become a prolific writer, was putting several things aside. Writer’s block, as far as I am concerned, does not exist. Sit down and write something, and you will have something written. Perfectionism is an excuse for not finishing something. You simply must draw on the strength of the discerning people who have given you positive feedback to not believe that your writing will be good enough, but rather to know that it will be.

For Fiction Writers: Do you listen (or talk to) to your characters?
When I create characters they become as real as the people I know; the only difference is that they only live inside my mind. When I write, I allow my characters to drive the story organically, based on what I think they would do in a given situation. I usually write a short outline to plot out the story, but it is really the characters who bring it to life.

What advice would you give other writers?
The most important thing is to just write. If you are creating something, whether it is good or bad, you have made something that you can build on. Learn from it, improve your technique, never stop learning the craft of writing. Only listen to advice or critique from the people who you believe mean to be helpful and constructive. Everyone wants to offer an opinion and oftentimes people will be quick to tear you down in order to (in a sort of sick way) build themselves up.

Don’t be one of these kids on American Idol who think they are the greatest thing since sliced bread until the judges tell them otherwise. Be discerning about your talents and your level of craft. If your writing really is terrible, work hard to get better. If you aren’t as talented as the next guy, work twice as hard as him on your application of the craft of writing.
Follow your passion. There is a fire inside of you about something. Channel it into your fiction and use that energy. It will definitely come out in the process.
Have fun. Don’t let writing become a chore. Do the work and find satisfaction in your results. Finishing a story and publishing a story are amazing things. If you are not there, you can get there. Just work as hard as you can and don’t give up.

How did you decide how to publish your books?
In the early days of my writing, I suppose I didn’t have very thick skin. I have submitted my work to three publishers. Two of them liked my writing and my stories, one of them asked for a multiple book proposal (she found another author while I was finishing the outlines for all of other stories) and one of them pitched my series during an editorial meeting at a good-sized publishing house (the result was that they couldn’t publish me because I was unknown, and they committed their publishing dollars to an author they had already worked with). This discouraged me enough to not want to submit my work to any more traditional publishers, even though it was pretty clear that I was on the right track.

I fell out of writing for awhile, and when I got back into it, the entire publishing world had changed. I could now publish myself, although the burden was entirely upon me to act as professional as any other publisher. I had to seek out an editor to copy edit my work, I had to hire an artist I could afford to draw eye-catching cover art, and I had to do all of the work to bring it all together, and then market myself. It is an ongoing process, but so far, it is extremely satisfying to be a self publisher.

What do you think about the future of book publishing?
Traditional publishers have long been the gate keepers of the industry, deciding who gets in and who doesn’t. While I don’t think there is anything wrong with using a traditional publisher, I will probably never go that route. There is too much control available to an author in self-publishing. You get to decide how your book should look, and how much it will sell for, etc. If done right, there is far more money to be made by an author this way. You just have to keep working hard and stay with it.

I think the future will only see more self-published authors, with even greater success stories. The next J.K. Rowling will probably be someone who decided on their own to self-publish their books on Amazon.com. Unfortunately, this will also flood the market with a lot of sub-par book and a lot of fad books, but ultimately, it is the reader who will filter these, and the best of the best will rise to the top.

What genres do you write?
I write children’s books, but I find that the stories and the characters transcend age. That’s why I say The Trying Tales of Chumbles & Grim is great for ages nine through adult.