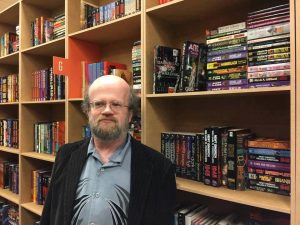 About Clay Gilbert:
Clay Gilbert has been hearing the voices of aliens, vampires, and people from the future since about the age of four. It wasn’t long before he started to think taking notes on what they said might be a good idea. This has led him many places—through the halls and classrooms of many schools, where he’s been both in front of the teacher’s desk and behind it, himself—to presenter’s podiums at conventions, and, most often, to the comfortable chair behind his writing desk at home, where he uses his Dell computer as both a beacon and a translator for the voices that still find their way through from countless worlds and planes of existence. Clay is the author of Annah: Children of Evohe, Book One, Dark Road to Paradise, and Eternity, as well as the Chief Editor for PDMI Publishing. These days, the place he calls home is Knoxville, Tennessee, where his cat, Bella, and his ball python, Ash, keep him company between visits from a teenaged alien named Annah, an undead, blood-drinking English professor named Martin Cabot, and a boy from the future named Eternity. And it’s a good thing, too—life is busy. And Clay’s still taking notes.

What inspires you to write?
I started when I was four, because I liked to read, and I realized the books I read were written by people like me. I write because I enjoy telling stories–stories that, although they may seem on the surface to be about aliens or vampires, are really a way to express my own experiences and thoughts about the world around me and what I think about life and being human. I think that no matter what story you’re telling, it should be something that moves you and has something to say to your readers.

Tell us about your writing process.
I start with characters–the people my story is about. Beyond having the character in mind or, ‘on stage’ if you will, I don’t really plan out the events of the story, I know about my main characters and their world, and what they’re interested in–their wants, needs, fears, dreams and desires. Story comes out of what the characters are driven by–the things they’re in pursuit of, and what gets in their way while they’re trying to reach their goals. I don’t outline. If I do that, I feel like I’ve already written the story. Stephen King once said, “I write to find out what it is I will have written.” I agree with him.

For Fiction Writers: Do you listen (or talk to) to your characters?
Absolutely. The stories are about them–I’m just taking dictation. Sometimes, they have different ideas about where they want the story to go than I do, and they’re always right. When I was writing “Annah”, the first novel of my sci-fi series Children of Evohe, there was a point at which Annah, the teenage alien girl who is the series’ main character, was going to go to her village elders to ask about something–or so I thought. Midway through writing that scene, and having a lot of trouble with it, I distinctly heard Annah’s voice in my head saying, “I do not know what you think I am going to do, but I am only eighteen cycles old. I am going to the homeground of my parents and ask them about this–not the Council of Elders.” Annah’s way worked better, and now, working on the second book in the series, I do things her way.

What advice would you give other writers?
Be regular. Sit down to write in the same place, at the same time, every day. If you train your mind to get into the right gear for writing, the work will come easier. I’ve never experienced writer’s block, and I don’t believe it exists. I think some authors run into it because they expect to, and they give themselves permission to be blocked. I don’t. I have work to do.

How did you decide how to publish your books?
I grew up in the late Seventies and early Eighties, when self-publishing didn’t exist, and I’m also from a background in academia. So, to me, being published has always meant having one’s work accepted by a publisher. I like having the knowledge that someone else thought my work was worth their footing the bill to put it out into the world, and also putting their name on it and standing behind it. I think that the backing of a publisher also allows you to get your foot in the door in certain markets where self-published authors still are not welcomed. I think that while the publishing industry has changed and continues to change, traditional publishing still has the most options to offer authors.

What do you think about the future of book publishing?
I think that while the book industry will continue to evolve, brick and mortar bookstores, as well as traditional publishing, will remain viable business models. The difference in the future is likely to be that they will increasingly be less dominant on the landscape of the industry.

What genres do you write?: Science Fiction, Horror, Urban Fantasy