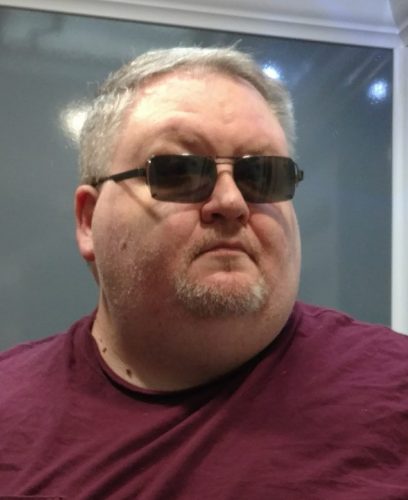 About Bobby Nash:
Bobby Nash is an award-winning author. He writes novels, comic books, short stories, and more. Bobby is a member of the International Association of Media Tie-in Writers and International Thriller Writers. On occasion, he occasionally appears in movies and TV shows, usually standing behind your favorite actor.

What inspires you to write?
I am a big fan of creating and telling stories. I love creating and getting to know characters and then putting them in odd, fun, and usually dangerous situations.

I'm inspired by great stories. I learn a lot from other writers and how they craft their tales. Reading (or watching) great stories inspires me to up my writing game.

Tell us about your writing process.
I don't outline well. I have tried, but when I do, I find that I lose something when I go back to write the actual story. Part of it is because I feel as though I have already told this story and am ready to move on.

What I do, instead of a full plot, is a loose plot. I carve out important plot points that I know I have to hit (I call them sign posts) and I aim from one sign post to the next, following the characters as they move in that direction and see how they do handle the situation the plot puts them in. This allows me to stay on course, but it also allows me to have those spontaneous character moments that only happen because I haven't constrained the characters before we start on the journey. It's a unique way to work, or so I've been told, but it has worked for me so far.

For Fiction Writers: Do you listen (or talk to) to your characters?
Absolutely. Character is key. Knowing my characters is essential for staying true to characters. If you take a plot and give it to three different characters, each character should approach the problem differently based on their personality and history. If you have to force your character to do something he or she would not normally do, then the story will often suffer and the reader will feel that something is off with the story. So, yeah, character is key. I have had some great twists happen in my book because the character revealed something unexpected, but in character that made the finished story better.

This happened in my story for Nightbeat: Night Stories, Deadly Deals!, and most recently in the SNOW series, where it happened a couple of different times. Each time, the story improved as a result.

The moral of the story is to trust your characters and they'll show you their story.

What advice would you give other writers?
Set attainable goals for yourself. Sure, it is great to have big, lofty goals like "I want to be a New York Times Bestselling Author" (this is actually one of my goals), but there should be some goals to reach before that one. Finishing your novel is a gial. When you finish, celebrate that victory. Then, aim for the next goal, which could be find a publisher or get it published. When that happens, celebrate the accomplishment and then look to the next goal.

Also, and this is a tough one… if you want to write as a career, that means you have to treat it like a career. That means writing when you aren't in the mood so you meet deadlines. It also means long nights. I was up until 4:40 a.m. this morning finishing a piece because it was due and I fell behind due to some family issues. I stayed up late to make sure I hit the deadline because that's my job.

How did you decide how to publish your books?
Once I write my stories, I want people to read them. I know that sounds odd, but it really is a motivating factor. What I really want is for readers to love my stories, but I know that will happen sometimes and on occasion, there will be those who don't like them.

I have been fortunate to work with some wonderful small press, mid-press, large press, and indie publishers. I have also self-published some books as well. I make those decisions based on which will get my work seen by the most eyes, and more importantly, the eyes of readers who like the genres I write. I look at a publisher's distribution, their marketing and promotion arm, and what their authors say about them. I try to make sure a publisher is the right fit before reaching out to them.

With self-publishing, I have books that were with publishers and eventually went out of print and rights reverted. I self-publish them and to keep them under the same umbrella, self-publish the sequels as well. This helps me brand the series.

What do you think about the future of book publishing?
I think that people like to read and I think we live in a golden age where there are more places for readers to read thanks to cell phones, tablets, and the like. I doubt that books are going anywhere. The real trick is making my books stand out. There are a lot of books out there and as an indie author, I have to work hard to get my work seen.

Books and stories are not going anywhere. The delivery method may change, but the need for storytellers will never go away.

What genres do you write?: I write a lot of genres, thanks to anthologies, but primarily I write thrillers, action, crime, and adventure stories, usually mixing and matching genres.