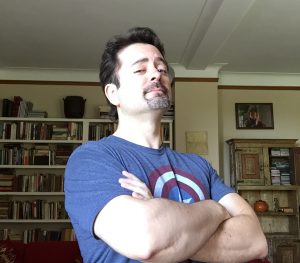 About Ben Zackheim:
Ben’s storytelling adventures started as a Production Assistant on the set of the film, A River Runs Throught It. After forgetting to bring the crew’s walkie talkies, losing Robert Redford’s jacket and asking Brad Pitt if he was related to Paul Newman (in front of Paul Newman) he decided that film production didn’t “speak” to him. Since no one else on the set would speak to him either he knew he needed to find work that required minimal human contact.

THAT he could do.

So he wrote Film and TV scripts for a few years, saw a couple produced and then made a lateral leap, which looked more like a clumsy stumble, into videogames.

He enjoyed it. But even with millions of people playing his games online, he yearned for the writing life and so abandoned lateral leaps and clumsy stumbles and decided to belly flop into the life of an author.

His two series, Shirley Link and The Camelot Kids appeal to young and old alike. Emily Neuburger of Parents.com says, “[Shirley Link] is an amazing series!” and Julie Ann Grasso (author of the Adventure of Caramel Cardamom books) says The Camelot Kids will “leave you clutching onto your Kindle.” Stephen King says, “I’m not providing blurbs at this time,” but Ben is chipping away at King’s resolve.

What inspires you to write?
Thousands of things inspire me to write. A snowy, quiet day where the world sleeps. A house guest who demands far too much of my time and attention, forcing me to pound on the keyboard with purpose. A dramatic rainstorm that reminds me of childhood’s lazy days by the fire with a comic book. Darth Vader’s musical theme. A six year old’s inaccurate turn-of-phrase. Waking to a new day. Fearing sleep. A picture of a castle. A smell. A hot shower. Wine. Maybe I should try to answer what doesn’t inspire me to write. …

Tell us about your writing process.
I’ve been trying something new lately. I’m writing my book as a script and reading it out loud. It can be awkward, but it’s also a wonderful way to hear your story in a way that helps you get out of your own head.

I’m also getting on the phone once every couple of weeks with a friend and telling him the story like an old fashioned, around-the-campfire storyteller. It’s fun and it highlights the parts that work and the parts that don’t.

For Fiction Writers: Do you listen (or talk to) to your characters?
Their voices were restrained before I started writing in screenplay format. Now they can really get in my head. Or is it me getting into theirs? I feel a story coming on!

What advice would you give other writers?
Be sure to always prioritize writing over the selling of books. Focus on the writing, even when the marketing process begins. Isolate your marketing efforts in an air-tight chamber of one, maybe two hours per week. It’s too easy for creative momentum to be stomped by the tactics of marketing.

How did you decide how to publish your books?
I worked at AOL’s Games.com for many years and studied the changes in the game industry closely. As players moved to mobile and began to clamor for one dollar iPhone/Android games I was shocked at how many small developers could make a living simply due to the sheer volume of App Store customers. The combo of doing what they wanted to do and not being beholden to publishers was, frankly, intoxicating. I left the job at AOL determined to write for a living and to do it on my terms. Not only do I believe that we’re at the start of a new era in selling art and entertainment, I know we are. Things have only just begun to change. It’s exciting and frightening, but it’s real. I’m embracing it.

Would I turn down a good deal to publish with a known imprint? Hell no! But I’d secure the right to continue to self-publish. It’s too much fun! Why would I ever quit?

Contracts with the big publishers will become more of a partnership as they will need to be selective of, and loyal to, their writers to ensure that love is reciprocated.
Indies and their demands will continue to pave the way for all future writers, removing barriers to the marketplace and making it more likely for authors to succeed.

I also think there will be a boom of small publishers made up of successful authors who want to share their readers and grow with combined resources. It just makes business sense.