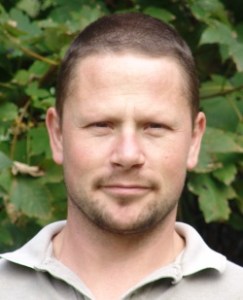 About Andrew Goodman:
I’m a writer of not only novels but also short stories and short- and full-length screenplays. ‘Tiberius Found’ and ‘Tiberius Bound’ are the first two parts of “The Emperor Initiative” series, with the final instalment “Tiberius Crowned” due for release in April 2015. I also have the opening story in my “Oliver Drummond” series – ‘Oliver Drummond and The Four Horsemen’ – available in print and eBook.

I currently work as a teacher in an adult-learning environment, but hope to be able to write full-time in the near future.

I live in the UK with my Welsh Terrier, Ceiwyn.

Tell us about your writing process.
I plan. A lot. I used to wing it but that only led to poorly thought out plots and characters, and ultimately poor stories. I learned from screenwriting that the planning process is critical and use a spreadsheet to plot out turning points, action, character traits, and everything else that comes from a complicated story.

For Fiction Writers: Do you listen (or talk to) to your characters?
I often talk to my characters. Or rather, they talk to me. I read narrative and dialogue out loud and always try to makes sure that each character ‘speaks’ with a different voice.

What advice would you give other writers?
Just keep writing and, almost more importantly, keep reading. Write for you, what you want, not what you think the ‘market’ wants, otherwise you’ll never be happy.

How did you decide how to publish your books?
I initially went down the route of trying to hook an agent and then a traditional publisher but the market is even more difficult these days than even ten years ago, so I chose to carry the burden myself and self-publish. i engaged a professional editor and cover artist but did everything else myself. It’s a tough job.

What do you think about the future of book publishing?
This is for fiction, rather than non-fiction.
With the ease in self-publishing I think the market will get more and more crowded and it’s up to authors to get their work known or, at least, heard about. I don’t think traditional publishing will ever die out but will be squeezed tighter, making it even more difficult for publishing houses to make profits, and that will ultimately hurt the writer.
For non-fiction, I think the traditional route is probably by far the best option.