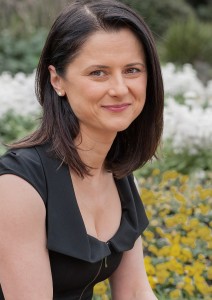 About Ana Spoke:
Ana Spoke is the author of Shizzle, Inc, which has been featured in Top 100 Amazon bestseller lists since its release in September 2015. She is currently working on the second instalment of the Isa Maxwell series. Ana lives in Australia with her fiancé.

What inspires you to write?
I have written a comedy, because it helps me balance my very serious and professional “other life.” Come to think of it, my life in general has been nothing but comedy material. Over the last twenty or so years, I’ve moved countries and changed professions multiple times. I’ve been a designer, a professor, a scientist, and a manager. Each of those changes was exciting, but inevitably brought on that dreaded feeling of “what did I get myself into this time?” and “I’ve finally bitten off more than I can chew!” This is exactly what happens to my protagonist Isa – she dreams of escaping her mediocre life, but when she finally gets an opportunity, the stress of it all is almost unbearable. Poor Isa has certainly bit off more than she can chew, and now she has to chew like hell!

Tell us about your writing process.
All the previous projects that did not get finished started with a jump straight into the first chapter. Shizzle, Inc started much in the same way, except I was emailing scenes to my sister one at a time, and she kept laughing and asking for more. That kept me going for a while, but the collection of scenes was not shaping up as a novel until I got serious. I had to learn all the basics about plotting, characterization, conflict, prose, you name it! I wrote character profiles and developed a chapter outline. I worked and reworked the plot with sticky notes on a living room wall. I edited and re-edited until it made me sick to read another word.

For Fiction Writers: Do you listen (or talk to) to your characters?
The first paranormal thing happened when one of the supporting characters opened his mouth for the first time. He is one of the bodyguards, which were originally intended to lurk in the shadows and were meant to be cookie-cutter identical and dumb (for comedic purposes). As soon as he opened his mouth, though, things changed.

“You don’t have a name,” I said, “You are a support character. You only have one line.”

“But my partner will be talking to me, so like what, he doesn’t know my name?”

“Okay,” he said. Then five minutes later he piped up again, this time with a funny idea for a dialogue. I liked it, so I wrote it down.

“Well,” he said, “Kinda looks like I have a personality now, donnit?”

“He sure is!” said the second bodyguard.

“Who the hell gave you permission to speak?” I asked him.

“Well, someone has to be a mastermind of this here unit?”

I was forced to agree. He demanded a name and didn’t like any of my suggestions until we settled on Kurt. Kurt and Serge then proceeded to argue with each other, which I definitely did not expect. It was funny, though, so I just did my best trying to write it all down.

What advice would you give other writers?
Don’t give up! This is not a new sentiment, and the history is full of authors who have been rejected time and again, only to find success on a hundredth try. I myself have been rejected or ignored over 70 times, and yet here I am, with a self-published bestseller and huge psychologist bills!

Another message I have is that any success takes a lot of work, so you better start now. Also, it doesn’t have to be overwhelming or a chore – it can be like a game, a welcome distraction from the everyday monotony. If you become addicted to blogging or writing the way most people are addicted to Angry Birds or Candy Crush, you are guaranteed to be a success!

How did you decide how to publish your books?
I’ve spent at least a year trying to pitch Shizzle, Inc. to agents and publishers. It was a grueling process, and I have a spreadsheet with over 70 contacts to prove that I really, really tried. I’m truly happy that the traditional route did not happen as I originally hoped – I’m now completely in control, and I’ve had so much fun producing and marketing my book!

What do you think about the future of book publishing?
I think self-publishing will become mainstream, and most publishing houses will go out of business, the way most bookstores did.

What genres do you write?: Humor, chicklit