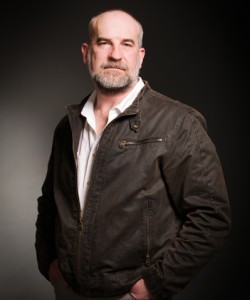 About Alan Porter:
I was born in Wales in 1967. After a successful career as a composer of theatre and commercial music in the 1990s I began writing in 2003. My first novel – a ghost story for 9-13 year-olds – was published in 2008.
I now write dark thrillers for adults; parables for our modern times that deal with subjects as diverse as mental illness (‘Run’, 2013) and genetic modification (‘GM’, 2014) and international terrorism (‘Sleeper Cell’, 2015).
I live in rural Worcestershire, England, with my wife and parrot.

What inspires you to write?
Everything. I’m an information omnivore, as I think most creative people are. I’m curious about ‘stuff’ – about people, history, technology, politics, the world around us. Story-telling is a natural extension of this curiosity: it’s me putting ideas together to create new situations; putting characters in places to see how they behave; exploring the incredible diversity of our world and our place in it. Hopefully what comes out in the end is entertaining to my readers – and sometimes thought-provoking too.

Tell us about your writing process.
Most of my books start with a very simple premise, which I then explore through actually writing the book. For example ‘GM’ started with the question ‘What could possibly go wrong with a genetically modified crop in war-torn Africa?’ ‘Sleeper Cell’ asked the question ‘What if our current obsession with Islamic terrorism is actually masking something much more serious going on with the governments we are meant to trust?’
This is dangerous because some ideas end up in blind alleys, some become too complex or require unbelievable situations to make the plots resolve. These are binned and I start again with another idea. Fortunately, I’m not short of ideas!
Occasionally I do draw up detailed plot outlines. My trilogy ‘Firestorm’ is one of those works that required a lot of forward plotting. It’s a time-travel story where time runs in two different directions simultaneously across the three books (Book 1: Descent was published a few years ago; 2: Realm of Violence is due out mid-2016; and 3: Malebolge in late 2017). Without a lot of planning it would have been easy to lose the thread and logic of the work – and having published book 1 before 2 and 3 were even written, that would have been a disaster!
Apart from sketch notes, I work entirely on screen (typing directly into the typesetting software, Quark Xpress). A first draft of a 90,000 word book takes about six months – sometimes more if there’s a lot of background research to do. I then go back and completely rewrite it for the second draft – I find ‘tinkering’ can destroy the flow and rhythm of the work, so it’s preferable to me to just rewrite it. This second draft is designed to iron out plot and character problems. I usually do a ‘final’ draft – sometimes a complete rewrite, sometimes just light editing if there’s not much needing to be done – then it goes to my editor.
Then the final corrections are done, it’s prepared for publication and off it goes. By this time I’ve usually got another book started!
I am a more-or-less full-time writer, and I aim to publish one book a year. 2016 will have two out as I’m ghost-writing a children’s novel, which takes a lot less time, but one a year pretty much keeps me busy.

For Fiction Writers: Do you listen (or talk to) to your characters?
Not specifically, but I do observe them. A well-rounded, complex character will often dictate their actions and sometimes it is worth ‘allowing’ them to go their own way to see where they end up! Doing this can suggest plot details that might not otherwise occur to me as a purely puppet-master writer. One good example comes from ‘Firestorm: Realm of Violence’. One of the main characters, who I have lived with for years, set up a meeting with another character with whom he rarely has much contact. It was necessary for the plot, and it was a good scene, but I couldn’t see exactly where it ‘fitted’ with the overall narrative, and was on the verge of cutting it down to just a brief piece of transitional description. But as I moved on through the novel, the real reason for this meeting became clear: it allowed a plot twist which was far cleverer than anything I would have thought of consciously. I’m convinced that that meeting came directly from John Fulgar himself (or at least my subconscious understanding of him), more than from me as a writer moving characters around the page.

What advice would you give other writers?
Three things: Firstly, and most importantly, write. It’s that simple. A writer writes. Do the hard yards of drafting, rewriting, constantly looking at your work and asking ‘is this right; is this the best I can do?’. Anyone with fingers can bash out a novel, but only someone with a fully-engaged brain and an unswerving desire to put only their best work out can ever really be a writer.
Secondly, be true to yourself. Write what you would want to read, not just what you think the market wants. Sure, if your passion is paranormal romance, write one, but not because you think that’s what the market wants. That market will move on (if it hasn’t already). Be original, be passionate, and dare to believe that the story you want to tell is one that only you can tell!
And finally, be prepared to play the long game. We hear stories of ‘overnight’ successes, but even where these are true they are extremely rare, and often a product of pure chance. Most writers are not successful with their debut book. The best success comes when you have half a dozen books out: that way you have enough to keep each new-found fan satisfied and your sales grow exponentially.

How did you decide how to publish your books?
I was unusual in that I never set out to be a writer. I worked as a musician for years but became disillusioned with the business and moved into publishing – first as a music typesetter, then as a book designer and typesetter. I wrote my first books as an exercise to see if I could (the filing cabinet behind me has the drafts of nine children’s novels I wrote during this learning period – all of which are terrible!). By the time I wrote ‘Midwinter Lucie’ (a ghost story for the 9-13 age group), I part-owned a small publishing company and thought it was worth trying my luck. The book came out, I got lucky and it was picked up by a national magazine and the publicity lead to decent (though not extravagant) sales: enough for me to write a second, then a third, and then turn it into my main job.
So I’m not really self-published, and I’m not really conventionally published either. Mine is not, however, a route I would recommend to budding authors: owning a successful publishing business before you start is really doing things the hard way!
If I were staring out now, I would say self-publish all the way! Don’t use it as an excuse to rush out a second-rate book, but save yourself the hassle of endless rejection by publishers and agents who (to put it charitably) don’t have the time or enthusiasm to really seek out new talent. Publishing is a truly democratic business now, and if you have a good book in you, put in the work and reap the rewards!

What do you think about the future of book publishing?
Book publishing is going through a massive upheaval right now. Since the abolition of the Net Book Agreement (in the UK), publishers’ margins have been squeezed and they have, rightly or wrongly, gone after only the most immediately commercial books – ghost-written sleb garbage mostly! This has made it extremely difficult for new authors to find placement with major agents or publishing houses. But that’s not a bad thing. Self-publishing is so technically easy these days that there is no barrier to market. If an author has a good book, a little bit of business acumen and a slice of luck, it’s perfectly possible to make a living from writing without ever having contact with the ‘traditional’ publishing world.
Of course, we are still in the early stages of this revolution, and the book world is awash with books ranging from extremely good to downright awful… and it’s tough for any writer to get noticed in this ocean. But I think in time this will settle. The optimist in me hopes that the cream will always rise.

What genres do you write?: Thrillers (mostly political and technological) and some horror