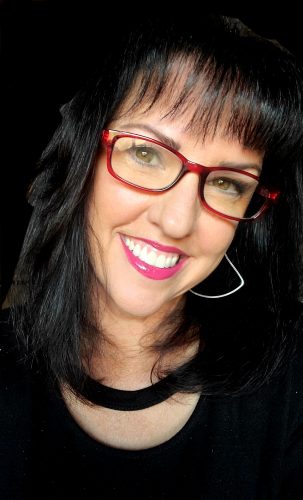 About A.R. Vagnetti:
A.R. Vagnetti is an American writer who grew up in the scalding Tucson desert. Her debut novel, Forgotten Storm, is the first book in her Award-Winning Storm Series and won the Top 20 Best Indie Books of 2019.

She does her best writing while camping, traveling, and on the beautiful shores of Lake Huron where she is now blessed to spend her summers away from the Arizona heat.

A.R. loves to transport readers into a fantastical world of paranormal romance where bold Alpha males will sacrifice anything for the strong, deeply scared, kickass females they love.

What inspires you to write?
I fell in love with books as a teenager when I picked up my first Harlequin Romance. Since then, imaginary characters have had real conversations in my head. Sometimes with me, other times with other characters.

I'll let you in on a secret. Until I started writing and allowing the voices in my head out, I always thought I was a little crazy.

What authors do you read when you aren’t writing?
My first love will always be JD Robb's In Death Series. And while they aren't paranormal, I adored the suspense and characters, especially yummy Alpha male, Roake! But it was JR Ward who introduced me to vampires who were the perfect combination of possessive Alpha males with a complex soft center.

Tell us about your writing process.
When I started this writing journey six years ago, I can honestly say I was a pure plotter. With Forgotten Storm, book 1, I created an in-depth outline, a short synopsis, a long synopsis. Every character had an extensive bio with a picture, and each chapter included a brief summary. Since I had no formal writing experience, I felt I had to practice everything I'd ever read or researched about writing a novel.

Forgotten Storm was a 2 1/2 year quest that consumed my every waking and sleeping moment. The anxiety it wasn't good enough plagued me constantly. She went through numerous rewrites, endless edits, and when I finally said, screw it, I've taken it as far as I can and submitted the manuscript, I was sure it would go nowhere.
Thank God I was wrong!

Writing book 2, Forbidden Storm, my stress level lowered from DEFCON 1 to about a 2.5. Most of the characters from Forgotten Storm streamed into Forbidden Storm, so I only created bios for any new roles. And while I still did a long synopsis, I nixed the shorter one and the outline. Hence, Forbidden Storm only took a year from the start to the time I submitted it to my publisher at the time.

I omitted a synopsis for books 3 and 4 since I was self-publishing, therefore lowering my stress level even more. I just did a plot point outline with some character bios before I sat down and let the adventure and characters stream from my brain to my fingers. My style has evolved into a "plottster." Part Plotter, part Panster, and my writing streamlined enough to produce the first draft of a book in four months. Some might say that's still too long, but sometimes the words are there, and sometimes they're not. Not to mention, I do have a life.

For Fiction Writers: Do you listen (or talk to) to your characters?
Oh, God! All the time. Their voices organize and become more fluid when I'm walking, but most often it's at an inconvenient time when I can't write it down.

What advice would you give other writers?
This is not an easy career choice or a profitable one in the beginning, but if you have the drive and disciple, and can wear numerous hats then I say go for it. Let your vision guide you and your creative juices flow. Whether you ever become successful or not, if you write a book, that my friend is something to be celebrated.

How did you decide how to publish your books?
I queried for a publisher right off but also joined #Pitmad on Twitter. I was picked up by a small press through #pitmad and published books 1 & 2 through them before they closed their doors. I was devastated at the prospect of enduring the whole querying process again so I decided to self-publish. It was a huge learning curve, which I'm still wading my way through, but I'm glad I did it. All the work, but also all the reward.

What do you think about the future of book publishing?
It has definitely shifted over the years. The prospect of being picked up by one of the Big Five is just a pipe dream for the average Jo. Unless you're famous in some way, I just don't see it happening. Self-published authors are rising in the ranks with some fabulous works in all genres, and I'm excited to see where the industry goes in the next five years.

What genres do you write?: Paranormal Romance