You are here: Home / Fiction / Action & Adventure / IMMACULATE: The Second Coming of the Christ by Jeff Fuell 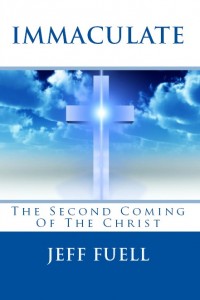 Meet Mary Matthews, a woman who was once very religious but has now lost her faith. When she was a little girl her father was heartlessly killed because he had been in the wrong place at the wrong time. Even though she had prayed to God to save him her prayers were ignored and her father died right in front of her, thus causing her to abandon everything that she had once believed in. Now she is a grown woman who discovers to her surprise that she is pregnant, only the father turns out to be somebody whom she would never suspect and that person’s son is destined to bring about an age undreamed of. Only now, a crazed madman is trying to kill her before such a thing can happen while another fights to see that new day come, both of whom are soldiers of God. While the two of them are on the run they begin to fall in love as they live for the day when the King of Kings will walk the earth once again.

What Inspired You to Write Your Book?
I have always wondered how Jesus Christ would return, and while doing so it occurred that He might do so the same way that He did the first time. It also occurred to me that some people might not be happy about His return and do whatever they could to stop it. The idea for a very inspirational yet dark story was born, although there is a good deal of dark humor. I suspect that this book will deeply affect those who read it.

How Did You Come up With Your Characters?
The characters that I used are based on certain characters in the Bible, my shaping them to serve this particular story. The rest that fill out the story are a product of my imagination.

Buy IMMACULATE: The Second Coming of the Christ on Barnes and Noble/Nook