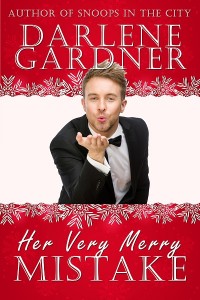 Lenora Patterson should have kept her lips zipped.

Because she didn’t, the listeners of a popular morning radio show believe the most maddening man Lenora has ever met is the love of her life. So does Nikos Calloway, the maddening man himself. And all the guests at a destination wedding where Lenora finds herself as Nikos’s plus one.

In a snowy backdrop with the magic of the holiday season all around, how can Lenora convince Nikos–and herself, as well–that it’s all a big mistake?

What Inspired You to Write Your Book?
I went on hiatus from writing romantic comedy and missed it. Desperately! I love watching romantic holiday movies on television during the Christmas season so decided to write one. Since there’s nothing more romantic than a Christmas wedding, I put one in the book to act as the setting. What better time than Christmas during a wedding to fall in love with love!

How Did You Come up With Your Characters?
One of my favorite plot lines is the reunion romance. I wanted to write about a woman who couldn’t forget about a man in her past, even if she couldn’t admit it to herself. So I came up with Lenora Patterson, an ambitious young woman who wants to make her mark in radio. Her foil is Nikos Calloway, who hasn’t been able to forget about Lenora, either. He’s much more upfront about his attraction to her, though. She keeps denying it, which makes for a fun story.

If Lenora Patterson didn’t come up with something fast, she’d find herself on a blind date with a man she’d have to love. Even if she didn’t.

She decided to make a stab at the truth.

“I don’t have time for a man in my life right now,” she said. “Too many other things are more important to me.”

Emma Ellerby shook her head, rustling her shockingly red curls. She was a small, stout, freckled woman in her fifties who favored bright clothing and starred in radio station WZPY’s immensely popular morning show A.M. With Em. Today, she wore a Christmassy red and green blouse with a yellow skirt. She had such a wonderful, crazy sense of style that Lenora thought it was a shame she was most often heard and not seen.

“Every woman should make time for a man like Byron,” Emma said in the beautiful, low-throated voice that had propelled her to fame in the Washington D.C. metropolitan area. “Unless… men aren’t your thing. In that case, Byron’s sister is gorgeous. And she’s gay!”

“Then you won’t be able to help but love Byron,” Emma interrupted. “You’ll want to make time in your life for him. I just know you’ll be perfect for each other.”

Lenora clenched the hands sitting in her lap so hard her knuckles turned as white as the December snow that was falling outside the large window of Emma’s office. More was at stake here than a simple date. The rumor was that Emma was going to add a co-host to A.M. With Em, and Lenora was determined that she would be that co-host.
As Emma’s personal assistant, Lenora had the inside track and a plan. She intended to dazzle Emma with her work ethic and innovative ideas so that the radio star couldn’t help but put her at the top of the list.

“Can we get back to talking about Second Chances?” The segment was one of Lenora’s innovative ideas. With Christmas Week fast approaching, the timing was perfect. “I read a story online about a man who became a prison chaplain after twenty years as an inmate. Listeners eat up sentimental stuff like that during the holidays.”

“Maybe we could do a holiday blind date segment instead.” Emma clapped her plump hands, her red bangle bracelets clanking against each other. “You and Byron could go on a date and then tell my audience all about it.”
Lenora tried so hard not to grimace that her face ached. Emma was seriously messing with her plans. And, in Lenora’s world, plans were paramount.

No matter that she was twenty-seven. She couldn’t even think about romance until her career as an on-air personality was firmly established.

“Did I mention Byron’s better looking than a movie star?” Emma continued. “It’s too bad our audience won’t be able to see him, but he’ll make a fabulous radio guest.”

“If we go with Second Chances,” Lenora said, “we can also do a segment we can call Kindergarten Grandma. I found a woman who went back to college after dropping out fifty years ago. Her dream was to be a kindergarten teacher, and that’s what she is right now.”

“Byron once dreamed of becoming an opera singer,” Emma said. “He has a voice Pavarotti would envy, so mellow, so smooth, so—”

“You don’t want your nephew anywhere near me,” Lenora cut in. “Mothers hide their sons when they see me coming.”

“Nonsense,” Emma said. “You’re a lovely person, Lenora. That’s why I want you to meet Byron.”

Lenora’s life at the radio station flashed before her eyes. She could guess what would happen if she went out with Lord Byron and things didn’t go well. No more hanging out in the engineer’s booth soaking up knowledge. No more speaking into the microphone and pretending she was on air. No more job.

“But the love of my life ruined me for anyone else!” Lenora blurted out.

That stopped Emma. The radio host tilted her red head, regarding Lenora with new interest. “I hadn’t realized you had such passion in your past. Tell me about this love of your life.”

“I loved him so much it hurt my heart to beat when we were apart,” Lenora replied, relieved that she’d finally turned Emma’s attention away from Byron. Emma was obviously waiting for something more, so Lenora obliged while keeping her story deliberately vague. “Sadly, it hurt even more to be together.”

“Where did you meet him?” Emma asked. “Was it in college?”

“Such a stressful time,” Emma said. “It’s no wonder so many college romances don’t work out.”

“Well said.” Lenora ignored the wave of guilt that swamped her for deceiving her boss until she remembered Lord Byron. It wasn’t as though Emma had given her a choice. “Getting back to Second Chances—”

“Surely this man, this love of your life, has a name,” Emma prodded.

Lenora grasped for something, anything. An image of a name on the note the station receptionist had handed her a few days ago popped into her mind.

It belonged to a man she had no intention of ever calling back. A man with hazel eyes, brown hair shot through with gold and a body to drool over. Her college roommate’s ex-boyfriend.

“Nikos,” she said, relieved that finally she had a name. “The love of my life’s name is Nikos Calloway.”