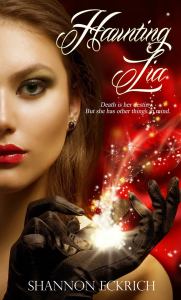 Death is her destiny. But she has other things in mind.

Lia Starr’s life isn’t a fairytale. It’s a reality overflowing with scary monsters, death, and betrayal—a past she left behind when she entered her new foster home. Now, with a loving family, a sister she’s always craved, and relief from the gruesome corpses that tormented her as a child, she’s finally content. Until a freak accident changes everything.

The monsters are back, and their mission is simple: drag Lia straight to their murky hell. When Aiden, an apparition, appears to Lia, she has hope once again. Because Aiden can cross the veil between the spirit world and the earthly dimension, physically fighting off the monsters and sending them back. With Aiden’s determination to keep her safe and his absorbing blue eyes, Lia can’t help falling in love with him. But who is he, and what does he really want? As Lia and Aiden’s relationship deepens, so does the mystery surrounding him.

What Inspired You to Write Your Book?
I’ve always held an interest in the paranormal and the spiritual world. I know there are other dimensions out there, and I wanted to create a romance between a living girl and a ghost. Falling in love for the first time is always exciting, but I wanted to raise the stakes. I wanted to create the first time romance between a guy and a girl, but wanted it on a more emotional level. My characters do fall in love, but they have one problem. They are unable to physically touch each other.

How Did You Come up With Your Characters?
When I first thought up the idea for this book, I knew I needed a character who was basically broken and scarred from her past. Lia Starr was the perfect candidate. As a child she was shoved from foster home to foster home until her life finally became stable. Of course, sometimes things can change that.

As for Aiden, I needed a guy who had it all. The perfect life, tons of friends, and very popular. Then it all had to be torn away from him in order to see things through others eyes.

About the Author:
Shannon Eckrich is a YA paranormal author with Crushing Hearts and Black Butterfly Publishing. Her novel, Haunting Lia became an Amazon International Bestseller shortly after its release in October 2013. The first installment of her Elemental Short Series, Goddess of Fire: Burn, quickly followed suit when it was released in June 2014.

When she’s not creating worlds that walk the line between fiction and reality, she enjoys spending time with her family and volunteering at her local firehouse.