You are here: Home / Fiction / Science Fiction / Habits Kick Back by Marsha Cornelius 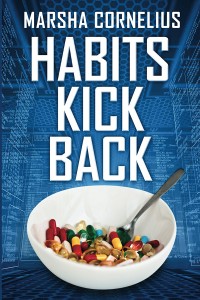 Prescription drugs are so common in the future they’re called supplements, and dispensed at meals like side dishes. Like everyone else, Luna takes pills to curb her appetite, increase her memory, focus her concentration, improve her mood, even suppress her sex drive.

By her sophomore year in college, however, she’s beginning to wonder what life is like outside this drug-induced state. The perfect opportunity to break out of the mire comes when she sees a picture of a medallion from the 5th century. She’s not sure where she’s seen it, but she hopes once her mind is clear, she will find the artifact.

When she stops taking supplements, she discovers food tastes delicious, her friend Sal is suddenly sexy, and the search for the lost medallion turns into a real adventure.

Hopefully, all her new habits don’t get her killed.

What Inspired You to Write Your Book?
It seems like these days everyone wants a quick fix for their problems. A pill to lose weight, a pill to stay alert, a pill to help concentrate, a pill to make you content, even a pill to get an erection.
I decided to look into the future when grade school children are all given pills to keep their minds on their studies, to ace tests, and to even suppress those pesky sexual urges. By the time my main character is in college, she’s been taking these supplements for over 15 years and she’s tired of it.

How Did You Come up With Your Characters?
My main character, Luna, is at the cusp of becoming an adult. She has begun to think about how she wants to live the rest of her life. I could have written her as a high school girl, but because there were sexual situations, I decided to make her a college sophomore. She had to be underage because there’s a drinking debacle, and she had to be living away from home.

Buy Habits Kick Back On Amazon