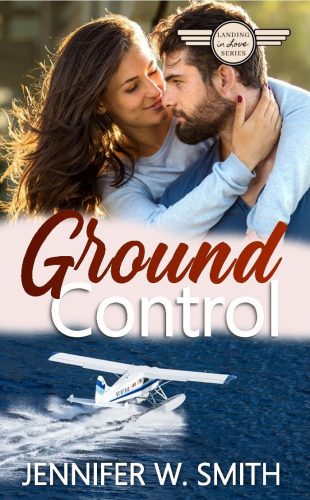 Floatplane pilot and tour guide Kat Kavanagh educates tourists about Vermont’s local environment—sometimes evoking too much passion. A conservation crusader with high ideals, Kat’s principles are compromised by money given to her from a dirty settlement. As if tarnished cash isn’t bad enough, when her ex-boyfriend returns home after three years, he’s in desperate need of an investor for his farm. Too bad she vowed never to use the money or ever speak to him again.

Environmental engineer Tucker Grant returns to Vermont from Honduras after a devastating earthquake shuts down the humanitarian project he worked on. With his health and livelihood affected, he settles a few miles from his college sweetheart. He hopes to recuperate while juggling a new career path—and just maybe rekindle his relationship with the girl he never forgot. Seeing Kat again awakens a powerful longing for the girl he regretted leaving behind. Can he earn her forgiveness?

Will he act like ground control, changing her course? Or will she maintain altitude, flying out of his reach forever?

What Inspired You to Write Your Book?
My inspiration for the whole Landing in Love series stems from my earlier years as a flight attendant working for US Airways, and also nowadays, as a semi-avid traveler. The general idea of the series is the protagonist is associated in some way with aviation (flight attendants, helicopter pilots, female billionaire and owner of an airline, etc.) who all find love in various small, New England towns. Ground Control is particularly inspired by a charming inn I found in Vermont on Lake Champlain that had floatplane tours. My hubby and I went there, though we didn’t stay at the inn, and took photos. My main character, Kat, is a young floatplane pilot who is passionate about the environment. And so, Vermont was the perfect setting. Each of the Landing in Love stories are stand-alones.

How Did You Come up With Your Characters?
I like to add ethnic diversity to some of my characters so when creating Kat Kavanagh I loved the idea she was a native Alaskan. According to my research, floatplane pilots are common in up there, so this idea of her coming from that area of the country seemed to tie the story together nicely. I wanted her love interest, Tucker Grant, to have been a well-traveled man so I used his degree in Environmental engineering to do promising ecological work in Honduras.

Book Sample
Tucker stood by the lake in the pre-dawn light, basking in sweet Vermont ambience. He’d been in Honduras so long that this cool June air confirmed he’d returned home. Steam rose off the dark water as if it breathed, a lethargic rousing creature causing the wildlife to stir and beware. A hermit thrush’s musical flute-like song carried on the breeze. Soft lapping against the dock added to the harmony. And the scent, earthy and familiar, soothed his restless soul.

Inhaling, he combatted his nerves and fortified his plan. He would apologize to the only girl he ever loved. He’d survived an earthquake and a building collapsing on him, but could he survive seeing Kat Kavanagh again after he’d broken her heart?

He gripped and massaged his shoulder, badly damaged in the building collapse months ago, attempting to ease the constant pain. Three years ago when he’d left this town—and his girl—he was in the best shape of his life. He’d set off to change the world. And he had. Along with the nonprofit he worked for, they’d completed several humanitarian projects in Central America. The earthquake—or fate or whatever forces of nature were at play that turned his life upside down—led him to this dock, eager to see Kat again.

Total forgiveness for heartbreak was improbable, but he hoped to smooth things over with her. The man she’d loved passionately and fiercely wasn’t the man who stood on the worn boards, defeated. Physically damaged, out of work, and in major debt, he grappled with his new reality. Not much to offer a girl like Katsitsanóron, an Alaskan native with extremely high ideals and an unrivaled beauty.