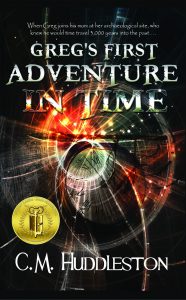 Twelve year old Greg mysteriously time travels 3,000 years into the past. Now a Native American boy has a spear pointed directly at his heart. Greg’s scared, worried, and hungry! Can he trust this stranger, can he get home, can he survive? Join Greg on his first adventure where there are moose to hunt and wolves to worry about, along with loads of fun! Greg’s wild adventures will excite and enlighten all while telling a rousing story about a young boy’s intriguing encounter with Native Americans.

What Inspired You to Write Your Book?
I worked as a professional archaeologist and wanted a way to teach children about archaeology and prehistory. So I wrote a time travel story with a mother who is an archaeologist and a boy who accidentally time travels 3000 years into the past. I wrote it over 20 years ago and finally published it in 2015.

How Did You Come up With Your Characters?
The mother is vaguely based on me as she is also an archaeologist. Greg is based my two grandsons and their ways of dealing with the world. Both are highly intelligent. One is very talkative like Greg, while the other has Greg's other characteristics.