You are here: Home / Children and Young Adult Books / Gambit by C.L. Denault 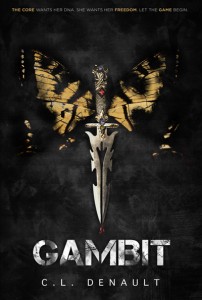 In Earth’s battle-ridden future, humans have evolved. Those with extraordinary skills rise to power and fame. Those without live in poverty.

Sixteen-year-old Willow Kent believed she was normal. But when a genetically-advanced military officer shows up in her village and questions her identity, long-buried secrets begin to emerge. With remarkable skills and a shocking genetic code the Core and its enemies will do anything to obtain, Willow suddenly finds the freedom she craves slipping through her fingers. Greed, corruption, and genetic tampering threaten every aspect of her existence as she’s thrust, unwilling, into the sophisticated culture of the elite Core city. To ensure peace, she must leave the past behind, marry a man she’s never met, and submit to the authority of a relentless officer with a hidden agenda of his own.

Her life has become a dangerous game. How much will she sacrifice in order to win?

What Inspired You to Write Your Book?
I happened to be watching an episode of “Alphas” one day on the Syfy channel and was intrigued by the idea of people with superhuman abilities being targeted and used for government purposes. I was already a huge X-Men fan and familiar with the idea of extraordinary humans hiding to avoid persecution. So I thought, why not turn the tables and give those people with special abilities absolute power over the normal population? That idea prompted me to start writing, and the story unfolded from there.

How Did You Come up With Your Characters?
The characters in Gambit came to me quite naturally and without much conscious effort. Only one was inspired by a real person, and that’s Patchie Kent. She’s the main character’s mother and has the same nurturing, selfless qualities my own mother had in life. Creating Patchie was a way to honor the amazing woman who raised me…and who now watches over me from her own special place in Heaven.

Book Sample
I stood at the hearth to warm myself. The heat felt good against the room’s deep chill, and the dancing flames intrigued me. My family couldn’t afford wood as a fuel source. Trees were a precious resource in the Outlying Lands. Burning them required a permit and cost a fortune. Given the heaping pile of logs stacked beside the fireplace, neither of those obstacles had been a problem for Reece.

He approached me with another strange device. “Turn and face me.”

I did as he asked, noting the way firelight flickered over his dark hair and reflected off his eyes. The effect was startling. Who was this man, that he gave the order for a bluster’s death one moment and shimmered like a cat the next?

The device he held began to glow. A warm ray of light extended above me and washed over my entire body. When it finished, an image in my shape hovered above his palm. A red dot blinked on the lower right half.

Exactly where my dagger was hidden.

“Well, look at that,” he said. “My little butterfly has a stinger.”

I took a step back, knowing what he was going to ask of me. But I wouldn’t give it up, not the gift Mum had given me long ago, the one valuable thing I owned.

“Hand it over, Morrigan.”

“Don’t call me that. My name is Willow.”

I hesitated, and his icy-blue eyes narrowed.

“We can handle this one of two ways. Either you give up your weapon willingly, or I take it from you. And I assure you, I won’t be gentle about it.”

“But this is my only protection,” I said slowly.

“You won’t need it. I’m all the security you require.”

I didn’t want his security. I had my own, and his silky arrogance was starting to get on my nerves, calling forth an unreasonable yet potent desire to challenge him. “My mum gave it to me. It’s mine, and you’re not taking it.”

He cocked an eyebrow. “Oh yes, I am. I won’t risk your attacking me when my back is turned.”

“It’s not for attacking, it’s for defending,” I argued irritably. “Which is exactly what I’ll do if you come any closer!”

“You are no match for me,” he said, with a husky laugh. An infuriating smile played at the corner of his mouth. “Do yourself a favor, and cease this childish game before you get hurt.”

Something desperate slid through my belly, hot and unrecognizable. It shook me with its intensity, and I had no strength against its will. Retreating another step, I felt for the weapon through my skirt. Vibrations tingled across my palms, and the skill’s power rushed through my veins. When I pictured the flat, silver surface of the blade, it trembled inside the scabbard as if ready to leap into my hand.

Let him try for it. He would regret laughing at me.

“Keep your distance,” I warned him, “or we’ll see who gets hurt.”

His smile vanished. He placed the scanning device on the mantle and came toward me, wearing the same smoldering expression I’d seen in the tavern. “You really don’t want to test me.”

“Is that so? Maybe you should worry about testing me. Or have you forgotten you’re dealing with a prodigy?”

Reece paused, his gaze darting to my thigh, where my hand rested protectively over the dagger. Any details beaten out of Piper would have been limited. He might be aware of my skill, but he had no way of knowing its full potential.

He continued toward me slowly, sizing me up the same way Kane sized up students prior to a spar. The dark bodysuit outlined every muscle bulging from his body, and I knew I was taking a risk. If I could just get to his heart, though, I might be able to stop him.

“This is your final warning.” He held out his hand, palm up. “Give me the weapon.”

My heart thudded in my chest. “No.”