You are here: Home / Non-fiction / Body/Mind/Spirit / From the robot to the mindful being: A model of the functioning and possible evolution of the human being by Jordi Castellá 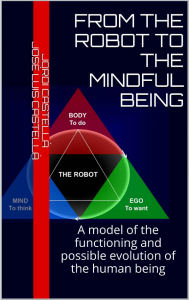 The aim of this essay, among others, is to help us to avoid unnecessary suffering, either for ourselves or for others. To start, we should understand that we act like robots, although we are not aware of it; if we want to improve, we need to understand how we function.

To this end, a model of the human being has been adopted which comprises three basic elements: the ego (the element that “gives commands” – through the emotions that it generates – and sets targets), the mind (the element that thinks about what to do to achieve these targets) and the body (the element that “does”; that executes the commands given by the mind to satisfy the ego).

The main parts of each element are analysed, as well as their interrelationships, explaining why we feel, think and act as we do; it is shown, particularly, how we are often enslaved by our body (through “habits”), our mind (by worrying about the future and not living in the present) and our ego (by making our life a continual struggle to obtain and maintain various goods, for reasons we usually are not even aware of).

The process described above raises questions such as “Can a robot be aware that it is a robot?” “Who am I really?” and “What is the meaning of compassion (the emotion that makes me suffer when I see suffering)?” among others. These questions have led to an extension of the previous model, to highlight the differences between the “automatic” way of acting and the “conscious-compassionate” way, and to see how we can move from one way to the other.

As a conclusion, fifteen recommendations are presented as suggestions to facilitate our personal evolution, freeing us from our own automatisms; this pieces of advice are aimed at improving control over our body, mind and ego and moving towards compassionate consciousness. These recommendations are not “happy thoughts”; they stem from the concepts previously explained, so the reader is not asked to “believe” them, but rather is invited to understand them. The first part of the work finalises with these recommendations.

What Inspired You to Write Your Book?
Initially I wanted basically my family and friend to let know about their own psychology. Once the book started growing, i realised it would be a great theory to share with as many people as possible. I think it is very useful and worth reading.

Book Sample
E. Spirit or just matter?
To define myself as “the one who observes what goes through the conscience” is to define myself by what I do, but that does not tell me what I am made of. Am I matter? Am I a particular part of my brain (with a new software) that watches what the rest of my body does, feels or thinks? This possibility raises some philosophical issues1 and has a major drawback: if I am material, I am not free, and this is difficult to reconcile with the fact that, when I am mindful, I can choose “voluntarily” where to focus my attention.
It seems clear, as already mentioned, that when I am “unconscious” I am not free. However, the unconscious person believes that he is free. This deeply-rooted illusion is caused by the fact that whenever someone asks himself (or is asked) if he is free, he becomes free, since he becomes (momentarily) mindful. It is like asking someone who is watching a movie what he thinks of the work of the actors; this stops him (briefly) from identifying with them and allows him to judge them “from the outside”.
It is much more difficult to assert that a person who is “mindful” (for example, someone who is meditating) is not the owner of his attention. In the state of mindfulness, freedom is an introspective truth. However, for this to be true, the substance that my “I” is formed of cannot be material2. If I am not material, the behaviour of my body in its environment is no longer determined by the characteristics of my body and its environment, as “I” am acting from the outside3; in this case “I” can drive my body just like a driver handles his vehicle.
It does not matter what name is given to the “non-material” substance that my “I” would be made of if this hypothesis were true. I can say that I am a spirit or that my nature is divine, that I am Consciousness, that I am part of a Universal Consciousness or, simply, that I am Energy, which is the only thing that exists and which forms everything, including my body (which is simply a – very complex – shape that Energy adopts temporarily).
Of course, not everyone will believe in this hypothesis. However, to dismiss it with a smirk of superiority for scientific reasons would be arrogant and indeed misguided, as physics tells us, for example, that: a) everything appeared suddenly from nothing (the Big Bang); b) there can be multiple dimensions and universes; c) observing affects the observed; d) there are things that can be in more than one place at a time; e) the universe is mostly composed of a “dark” energy which is completely unknown; f) space is not empty, but is filled with a concentrated – but undetectable – energy whose fluctuations could be what generates the matter we know. Many years of study are required to understand these physical realities; in the absence of these studies, we must recognise that a healthy dose of credulity (or scientific faith) is needed to accept them as true.

Links to Purchase Print Books
Buy From the robot to the mindful being: A model of the functioning and possible evolution of the human being Print Edition at Amazon

Buy From the robot to the mindful being: A model of the functioning and possible evolution of the human being On Amazon