You are here: Home / Children and Young Adult Books / Fright On, Bentley! by Michael Owen Jones 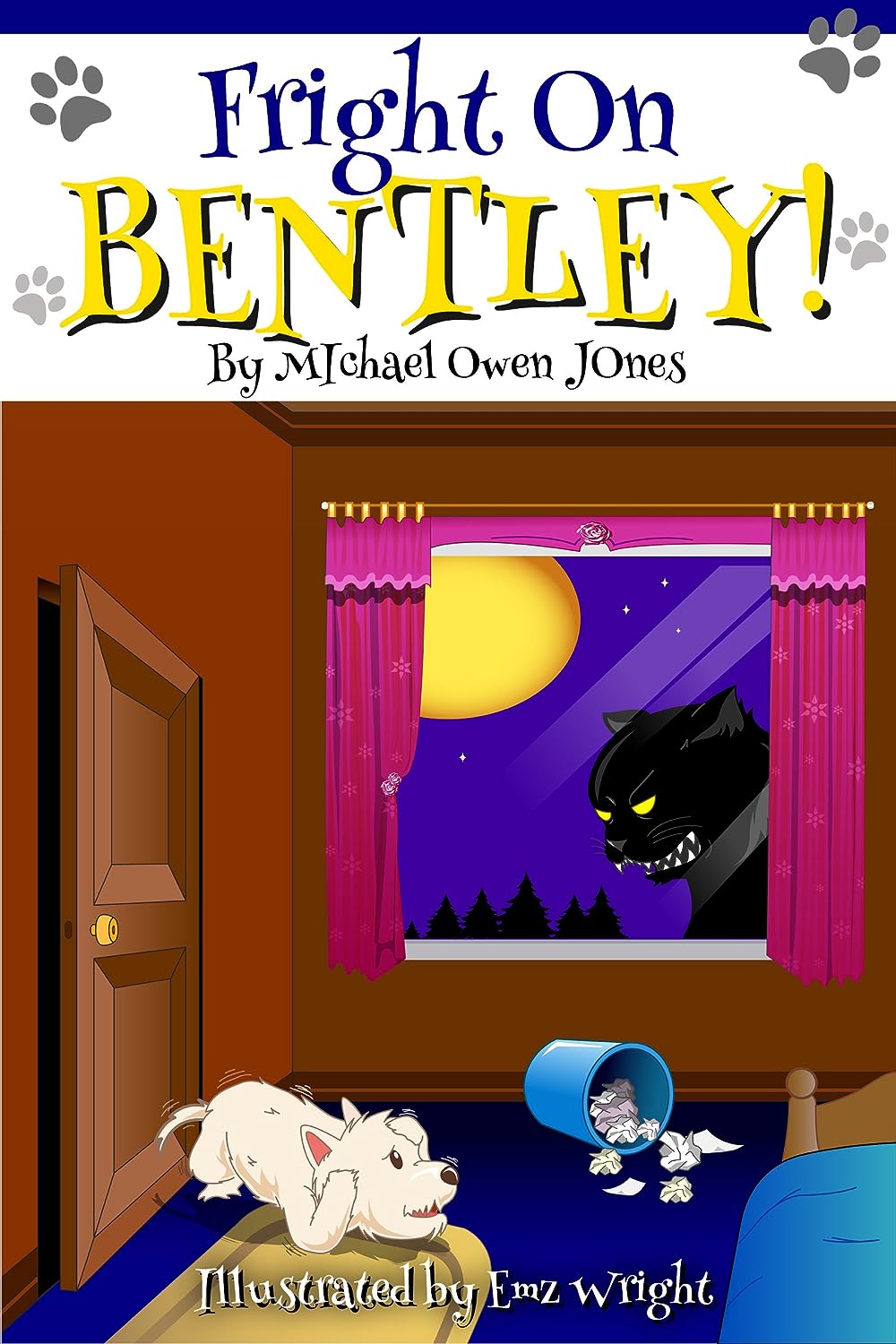 What do a monster, a bully, and a full moon have in common? Problems for Bentley, of course! Follow Bentley and his trusty side kick, Wendell, as they are rescued from a frozen doom, and as they shadow Meezel the Weasel to discover the secret of his true intentions. Find out if Bentley has finally escaped the clutches of Rodney, his arch enemy, or if Rodney has left him alone to face a looming terror known as … Megabite!

What Inspired You to Write Your Book?
A number of years ago, we used to spend our summers on Mayne Island (one of the Gulf Islands just offshore from Vancouver, BC. We used to take our tiny toy poodle over there with us, and pretend that she talked to the animals (other dogs, island deer, etc.). That little dog was my inspiration for Bentley. The setting for the “Bentley” books – trees, beach, small shops, etc. was a composite of Mayne Island and a few other places nearby that we used to visit. As a teacher, I have on occasion had to deal with students who chose to exhibit bullying behaviour. As with many people, I experienced the torment of being bullied when I was young. Hence, I attempt to deal with the serious theme of bullying through the lens of a humorous script.

How Did You Come up With Your Characters?
Bentley was a derivation of the little dog we once owned. Rodney is the personification of the predatory bully that many people can relate to. Aunt Fanny is a humorous character who developes in an interesting way throughout the series. Wendell is the quintessential faithful friend and side kick. The other characters? Stay tuned and you will find out soon enough!

Possibly the only family member that would or even could make sounds like that!

Now, truth be told, Bentley was at the end of a very tough and tiring day.

He had come dangerously close to being flattened by an outrageously large lady.

He had been accused of stealing a favourite stuffed bear.

He had been chased by a killer cat.

He had almost drowned in the ocean.

And he had been close to dying of thirst.

After lying on the couch broken by Aunt Fanny, the outrageously large lady, Bentley had come upstairs again to find his favourite soft spot on Rebecca’s bed.

And relax he planned to do!

As beds went, Rebecca’s was his favourite. With its many furry stuffed friends and its extra big pillows, it was an easy choice.
It wasn’t that he had been told NOT to go on the bed. It was just that, whenever anyone saw him on a bed, he was always shooed off.
But nobody was around now.

And, anyway, Bentley was used to that kind of treatment.

It was a dog’s life!

But that all changed when he looked up through the bedroom window.

It was a clear summer night.

A full moon shone luminously in the deep velvety blue of the sky.

And looking in through the window was a monster!

It had been sitting, waiting on the roof outside the window. And it was staring in with its pointed black ears, sharp fangs, and wicked yellow eyes.

About the Author:
I have been an elementary school teacher for almost a quarter century now. I have an undergraduate degree in English, and a Master’s Degree in Education. Prior to that, I was a professional business writer (along with other assorted wanderings off the trail!) I have always loved to write both fiction and non-fiction, and have searched for a number of years for an outlet for my craft. Now, thanks to technology I, along with many other folk, have found the mother lode – the chance to skate past the gatekeepers of traditional publishing towards success as an indie writer based on nothing but drive, some skill, and the perseverance to succeed and make things happen for ourselves in the wacky world of writing.

Links to Purchase eBooks
Link To Buy Fright On, Bentley! On Amazon