You are here: Home / Fiction / Women's Fiction / Four Ladies Only by Alretha Thomas 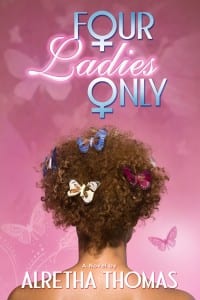 Sheridan Hawkins is a chain-smoking, former high school prom queen, trying to survive a marriage fraught with financial and emotional difficulties. Faye “Dimples” Davis is the first lady of a megachurch who desperately wants to have a baby. Victoria Williams is an elementary school teacher fighting for the love of her estranged husband and children. Danielle Wiley is a powerhouse attorney grappling with her sexual identity. These are the heroines of “Four Ladies Only.” Their friendship began two decades ago in middle school and continued through high school. However, in their senior year, a horrific event took place that destroyed their relationship and belief and trust in one another. Twenty years later, the death of their mutual friend, Sabrina Brown, motivates them to try to reconcile. However, in the process, they are forced to tackle the secrets, lies, deceit, and hypocrisy that underpin each of their lives. But they soon come to realize that their biggest hurdle will be facing and reliving the one night that led to twenty years of separation.

What Inspired You to Write Your Book?
One day I was at the gym and I had just gotten out of the shower. I looked around at all the other women who were there, thinking about what a sacrifice we all make each morning, getting up early to stay fit. That thought led to other thoughts about women and friendships and how those friends can go from blissful to baleful over minor and not so minor issues. This let me to writing Four Ladies Only, a story that deals with four women who gave up on a close friendship for twenty years. I was excited about writing this book because for the past several years I’ve been writing a series.

How Did You Come up With Your Characters?
The four women in Four Ladies Only came to me quite easily. I just knew that I wanted them to be very distinct when it came to their various backgrounds and idiosyncracies. They’re not based on anyone in particular, but readers tell me that they see themselves or someone they know in each character.

Author Bio:
An author and playwright, Alretha Thomas is making her name through her pen. Award winning plays and wanting to help her community, Alretha’s background is as diverse as her personality. She started at the age of ten, when her 5th grade teacher picked and read her short story assignment in front of the class—that simple, loving act empowered a new writer. Continuing in high school, her numerous original oratorical conquests on the Speech Team led her to a journalism concentration at USC.

Upon graduating, Alretha soon realized that her interest in journalism was not heartfelt. While at the taping of a live sitcom, the producer noticed her and encouraged her hand at modeling. Modeling didn’t mean much to her, but it did lead her to acting and a NAACP Theatre Award Nomination (1993) for BEST ACTRESS. Alretha left acting and began to write full time. Her church gave her an outlet to fulfill her writing desires through their Liturgical Fine Arts Department wherein Alretha penned twelve theatre pieces—the community response was overwhelming.

This led to full length plays outside of the church. In 2002, The Stella Adler Theater presented A Shrine to Junior. The play was nominated for an NAACP Theatre Award and in 2004, Alretha’s play, Civil Rites, was the recipient of an NAACP Theatre Award. Her play Grandpa’s Truth ran at the Inglewood Playhouse in Inglewood, California in 2006, and was extended more than once by popular demand. Not only did radio station KJLH support by recommending this production to its listeners, but notables like the Mayor of Inglewood, Roosevelt Dorn, and music legends like Freda Payne and Stevie Wonder had critical acclaim for Grandpa’s Truth. This wonderful piece was featured on Channel 5 (KTLA News) by Entertainment Reporter, Sam Rubin. Additionally, in 2007, Alretha’s play, Sacrificing Simone had a successful run at Stage 52 in Los Angeles and was called “an inspirational crowd pleaser” by the Los Angeles Times and in 2009, Alretha’s ground breaking One, Woman Two Lives, starring Kellita Smith (The Bernie Mac Show), directed by four-time NAACP Image Award Best Director recipient Denise Dowse, garnered rave reviews from critics and audiences.

In between plays, Alretha’s first novel, Daughter Denied, was launched in 2008 and has received glowing reviews from readers and book clubs across the country. Representing her book, Alretha has been the guest on many radio shows and television shows, including San Francisco Public Affairs show Bay Sunday with Barbara Rodgers on KTLA Channel 5. In 2011, Alretha launched her second novel, Dancing Her Dreams Away, and it was also well received. Her third novel, Married in the Nick of Nine, launched in 2012, inspired Alretha to write a standalone series, that in January 2014, was picked up by Soul Mate Publishing in a four-book deal. The first book in the series, “Married in the Nick of Nine” will be rereleased in the summer of 2014. The other books in the series, “The Baby in the Window,” “One Harte, Two Loves,” and “Renee’s Return,” will follow. “Four Ladies Only” is Alretha’s third indie novel.