You are here: Home / Fiction / Horror / Father of Lies by S. E. England 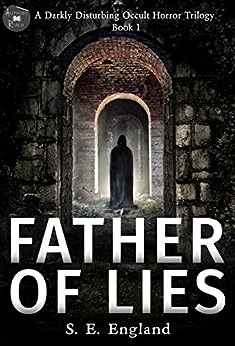 With no known identity or family, Ruby is the most aggressive and disturbed patient ever admitted to Drummersgate High Security Forensic Unit, situated on the bleak Derbyshire moors in England. Eventually, after almost two years with no improvement, psychiatrist Jack McGowan, decides to take a risk and hypnotises her…big mistake.
From that point on everything changes. A horrific dark force is unleashed on the entire medical team, as each in turn attempts to unlock the girl’s shocking and sinister past. Who is she? And how did she survive such immeasurable evil when no one else can?
Soon enough their questions lead to a desolate northern mining village, a haunted mill…and the heart of all darkness.
Sleep tight!

What Inspired You to Write Your Book?
I was inspired to write this book by a number of factors which came together – the fact I was a writer already, my history working in psychiatry, an unhealthy interest in the occult and the supernatural, and then meeting a lady who has what used to be called multiple personality disorder (now known as DID – disassociative identity disorder). What this lady endured in her childhood – and all those like her – affected me very deeply, and after that, ‘Father of Lies’ was born!

How Did You Come up With Your Characters?
Ruby originated from having met someone with Disassociative Identity Disorder – she then became her own person with her own background. The Father of Lies actually came from – and this is really spooky – a ghost I once saw! The medical staff come from all sorts of places – I think some of the pharmaceutical reps and doctors I’ve met over the years would be thrilled!

Book Sample
This is the beginning of the hypnosis scene – after which everything changes!

Extract from ‘Father of Lies’: Chapter 5:

The treatment room had been designed for both relaxation and safety. From the large, double glazed window there was a breathtaking view of wild moorland, painted that day in a glory of purple heather. Clouds scudded across the sky, a weak winter sun chasing shadows over jutting rocks, a kestrel hovering with fluttering, shrouded wings.
Jack pulled the blinds, and slats of crystal light filtered onto the walls. Next to his armchair there was a panic button; and high on the walls, tiny electric blue lights inside the cameras, signified he and his client would be observed by security staff.
Overhead, fluorescent tubes fizzed, and bulky radiators thumped out suffocating heat. There were no other sounds, save for the wind buffering the solid walls and occasionally rattling the windows.
A small comfortable sofa had been placed beside the window, and in the far corner of the room there was a desk and another chair. A couple of Monets broke the monotony of magnolia paintwork. And the whole room smelled of floor polish.
Ruby sat curled up on the sofa like a small child with her knees drawn up to her chest, holding tightly onto Becky’s hand. Only the slight judder of her legs and the occasional tic in her jaw, gave away the use of anti-psychotic drugs.
Jack sat down. “Are you feeling okay, Ruby?”
Barely perceptibly, she nodded.
He raised an eyebrow. Exchanged a look with Becky. This was not her usual behaviour. Normally Ruby would be eyeing him suspiciously, recoiling visibly, and kicking if he got too close.
Today though, she appeared to be almost inhumanly calm, gazing at the far wall with her pale blue eyes unfocused and glassy. Not really there, Jack thought. Far, far away…
Who knew when the monster would leap out of that tranquility, though? They’d all been caught out before. She could switch in a heartbeat.
“Ruby, you know we want to help you, don’t you?”
No response.
“Thing is – I have something new I’d like to try. Is that okay with you?”
No response.
Then faintly, oh so faintly…Jack strained his ears… there came the silvery humming of an old nursery rhyme, as if it had arrived on a mystical breeze from a time long, long ago…‘Four and twenty blackbirds…’
Fairy-like, he recalled later, a tinkling, ethereal tune, which gradually increased in strength and volume as he explained about the tiny dose of LSD and the gentle hypnosis technique he’d like to try. Anytime she wanted to stop or if she became too distressed, he would bring her out of it. And Becky would be with her the whole time.
The humming grew ever louder. He glanced at Becky. This wasn’t going to work, was it? She was blocking him out.
Then suddenly it stopped. Ruby turned and looked at him with a clear, somewhat challenging expression. Snatched and swallowed the proffered tablet with a glass of water. Folded her arms across her chest and waited.
A sharp gust of wind shook the window.