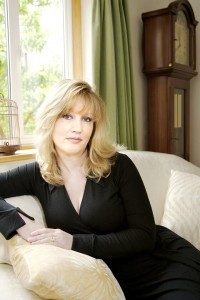 About Sarah England:
I’m Sarah England and I live in Cheshire in the UK. I’ve been a fiction writer for many years now, with over 160 short stories and serials published in magazines, newspapers and anthologies. My first novel was a comedy (‘Expected’) which was published in the small press; followed by a collection of tales from the dark side (‘3am and Wide Awake’). Both are now on my own label – EchoWords – as is ‘Father of Lies’ – a brand new supernatural horror novel.
I originally trained as a nurse in Sheffield, and then worked in medical sales and marketing, specialising in psychiatry – a theme which carries into many of my stories, and features strongly in ‘Father of Lies’. I hope to continue as a novelist, depending on whether readers like my work, of course!

What inspires you to write?
I feel compelled to write fiction. Frankly, there are much easier ways to make a living so it has to be who I am – everything I am really! Much of my work contains an element of the medical or psychological, and that stems from over 20 years in medicine, mostly psychiatry. But that would be my own experience coming into it …mostly what I do is observe, note tiny details and then ‘bank them for later’…With a somewhat bipolar swing from comedy to horror, it’s about making sense of life, of people, of situations, and then turning them into something entertaining for a reader to enjoy. All I want to do is be read! That’s it.

Tell us about your writing process.
I get an idea and then it starts to grow. What I can’t do is plot in detail because I actually become the characters in my head. Once they start to be real to me, I can see them and they do the talking. It doesn’t matter if my protagonist is male or female, young or old, nice or horrible – I am them for the entire time I’m in their heads…or they are in mine… shriek! Which is it?
So how does the short story or novel develop from an idea? That’s where my brain has to work hard to develop a plot and sub-plots. It will start to take shape once I’ve got the location, the characters and know what I want the story to say. From that point on it’s a bit of a mystery. The weird thing is, I know as I’m going along whether it’s going to work well or not and if I get a tingle of excitement…well that’s pure joy!

For Fiction Writers: Do you listen (or talk to) to your characters?
I don’t listen to my characters because I am them. They are me. I am in their heads even if they are stark staring bonkers. I do what they would do (with my pen) and say what they would say. Does that make me bonkers too?

What advice would you give other writers?
I would say read as much as you can – but the very best! Read the classics and read the award winners and not just mass bestsellers. There is an art to story telling and a craft to writing good prose. With hard work you can combine the two… but it won’t happen overnight. Creative writing classes are useful too, or a correspondence course. Personally I’m wary of too much critique as you need to find your own voice and build confidence. It really does take a long time – and like anything worth having it doesn’t come easy. Oh and rejections are part of what makes you better – so stick with it!

How did you decide how to publish your books?
I had many short stories and a few serials published in magazines, newspapers and anthologies first – long before I thought to write a book. Then my collection of darker stories was published by Alfie Dog – now on my own label. I also had a comedy, which had been written and re-written many times, and was accepted by an American publisher who, shortly afterwards, folded! Just my luck. So I submitted it to another small press publisher – Crooked Cat – and they too it. I guess that gave me a little confidence, but the marketing aspect was tiny so when I wrote ‘Father of Lies’ and it meant so much to me, I decided to bite the bullet, set up my own company and put all 3 on it! So here goes….

What do you think about the future of book publishing?
I think it is a very exciting and tumultuous time. The top big 5 publishers still hold all the power, but also there is a sea of thousands and thousands of self-published books with many not being that great… so how does a reader choose? I don’t know! I guess that’s where recommendations and reviews come in, plus reputations and making sure you look at the writer’s biography to see what they’ve done before. For writers I’d say it’s really tough just now. The big publishers have established stables of writers, and agents only choose one or two new clients a year – usually prize winners. I don’t know how it will pan out but all we can do is stick with it and hope readers like our books enough to recommend and review them.

What genres do you write?: Horror, paranormal, supernatural, thrillers, comedy