You are here: Home / Fiction / Horror / Fairy Food: There’re No Such Things As Fairytales by Pamela Benjamin 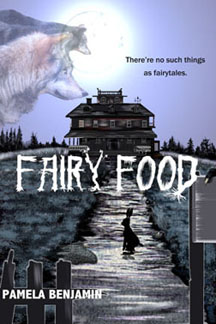 A horror story on the lives of several young entertainers trying to survive a vicious night in the mountains that harbor a voracious breed of admirers.

This thriller will make you wary of covered bridges, forks in the road and social events held in clandestine counties. The story holds a classic conspiracy between man and that which isn’t man. Fairy Food, a soul stirring tribute to its time, gives an alternative solution to the human condition.

What Inspired You to Write Your Book?
Time period. I favor decades prior to the late 80s. That’s when spiritual awareness, morals, creativity and individuality was still cherished. Also inspiring were one of my visits to the mountains when I got to see real wolves for the first time up close. I look for anything beyond the quotidian run of life, as I know it, only to construct how I’d like it to be for a little while. I needed to see a change in the cast of humans I’d grown up around as well as ones I’d observed, regardless of what they looked like or where they came from; what positions they held. This feeling bred in me a need to put that change on paper so that eventually, it’ll meet me on foot.

I’m assuming everyone daydreams of how life should be but depending on the individual those dreams are at a tortuous, fatal cost to others. Hence, whatever may be considered harmless fictional ideas precedes its reality to come. Werewolves.

How Did You Come up With Your Characters?
Some are characters I derived from my favorite TV shows, growing up; other characters mimic actual people I know or have known. With all the different colors, shades, shapes, faiths and personalities that make up this world, character descriptions all come down to the writer’s choice, experience and observation. I think that’s where fiction comes in because there’s an arsenal of untapped subjects waiting to be used by the imagination. As a reader, I never use the writer’s description of a character’s exterior. The characters needn’t always be attractive but even just have that personality you love to hate or one you can identify with in every emotion. I tend to make up for in stories what’s lacking in the world made public today. My characters represent, to me, what was thrown or hidden away since the coming of the millennium; Suspense, mystery, subtlety, long courtships, a strong reason behind the mayhem. I acknowledge the double standards when it comes to men and women; youth and attractiveness go BOTH ways. I write characters according to what I’d like to see more of in the world. When I’m fed up with real life dystopia, I write for a group of hippies seeking utopia.

Maybe I’m contradicting myself. Good and bad are the classic clash that make a character and a theme what it is. There are just so many variations when it comes to portraying them.

Book Sample
Three floors above, Reign’s anger fueled him to look passed the carnage upstairs. He refused to pay homage to the imagination of lives being snuffed out from whole families — such as a mother, two children and a father in one bedroom. Their bodies weren’t whole but the wholesomeness of who they once were, lingered in that room. One middle-aged man who lay on the floor half way passed his door and the other half inside the room, had had a gun ready to draw from his holster but his arm was chewed away; he was impaled and his head almost completely severed from his body. Reign shook his head, allowing a thought to impose on him. This is no wolf kill. It’s an overkill.

Buy Fairy Food: There’re No Such Things As Fairytales On Amazon