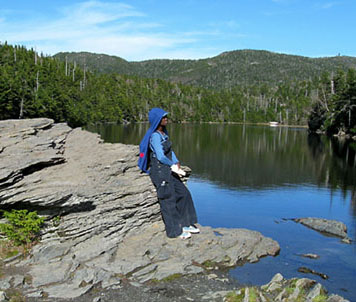 About Pamela Benjamin:
Student of Visual, Creative and Spiritually inspired art, Pamela is thankful to God for granting her the privilege to be a creator and say that it is good. Everybody’s got his own style of something; that’s a blessing. One might take offense but Pam considers it a compliment if she’s told, “You don’t sound or do things like anyone I’ve ever known.”

Pamela has been writing fictional stories, since she was 11 years old. It’s a welcomed catharsis. She’d often wow her English/Creative Writing teachers with distinguishing characters and unheard of destinations. She’s a graduate of Art & Design High School. After 16 years as a typist and performing clerical administrative duties, she pursued and expanded her
career as a freelance artist in painting, fabric pattern design and general illustration. Craft hobbies include doll-making, knitting and sewing. Additionally, composing music has been a fulfilling expression of her creativity.

She hopes to expand her creativity and business vision through a workshop on the grounds of her own farmland in the northern mountains, where she can cultivate various ideas from God as well as natural sources.

What inspires you to write?
I have a library of fiction stories I’d written in the last 25 years some of which are a work in progress to be published. Fairy Food is the first to test the waters. I originally wrote it in 2004 and have been revising and tweaking it up to its final, last year. I’ve loved writing since grade school. The characters are real to me. I remember being in a sector of Macy’s or Gimbles to try out one of the electric typewriters; I wrote on a clean sheet of paper, “Vampires are attacking the city”, hoping to incite pandemonium. My most exciting Christmas was when I got my first typewriter at 12 years. I couldn’t stop poking the keys for all the short stories they told. Today, I think I’d need a course in learning how to operate an electric or manual typewriter; back space, white out, line spacing, no highlighting to delete!

I commend those who are able to write about themselves and their personal lives; I’m an observer and prefer to give my life to another character, adding sweet, dulcet ingredients to mitigate the bitterness or sharp, gritty additives to magnify her bite.

Tell us about your writing process.
I love listening to music while I write. I’ve also been composing it within the last three years and its been a blessed fulfillment. I love it when I’m writing an act in a chapter and the music seems to go with the flow just like on a movie screen. Thunder storms are greatly inspiring. My favorite subjects involve animals, nature and the supernatural. My genre is Fiction-Horror-Thriller. I’ve always been a horror fan with an occasional sci-fi and fantasy thrown into my repertoire of book reads. Werewolves, vampires and ghosts offer the most fun to write about; those were the main themes I read growing up. When I observe people, I place them into such categories. Depending on looks and personality, they’re either werewolf, vampire or prey. On rare occasions, I tend to place myself as a character in a story; best way to live.

When I get an idea for a story, I grab almost anything to write its main inception on. I can also be up writing as late or early as 4am if I’m really caught up.

What advice would you give other writers?
When you love who you are and doing what you do, then, let no one discourage you.

How did you decide how to publish your books?
Aside from budget, I initially wanted to see what it would be like to do this on my own. I’m curious to find out what kind of return I’ll get on this investment. Regardless of what comes, I’ll still love write stories.

What do you think about the future of book publishing?
As long as there’s an audience and a venue for reading, book publishing should be a permanent fixture.

What genres do you write?: To reiterate, I favor fiction Horror, Fantasy and the Supernatural.