You are here: Home / Fiction / Romance / Evaporate by Carrigan Fox 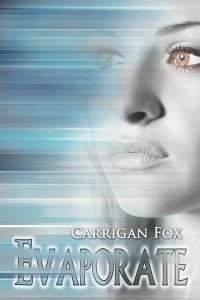 It’s been two years since Eva Sokolov came home to join the local police force in hopes of putting to rest the unsolved mystery of her parents’ brutal murder. But after all these years, the case is beyond cold. Things heat up when she responds to a swatting call at the high school and encounters the charmingly goofy Nate Gardner. While the chemistry is undeniable, Eva is–by reputation–a cold and hardened woman with a talent for failed relationships. Secretly, she dons silk lingerie and loses herself in romance books. But her secrecy isn’t limited to the undergarments she hides beneath her masculine uniform and bulletproof vest. She also is able to teleport, a skill she considers more of a risk than an asset. And given that her parents’ killer has returned and is intent on trying to expose her and kill her, she may be right.

What Inspired You to Write Your Book?
I have pretty eclectic tastes in both literature and music. For the past year, I’ve been immersed in my Demimonde Trilogy, which is historical. The historicals are pretty all-consuming because of the research involved. So I took a break from doing the final book in the trilogy and wanted to do something a bit more unique. I decided to revisit the paranormal genre. I also wanted a stand-alone book. So after brainstorming various angles in the paranormal world, I came up with this idea of addressing teleportation. The best part about writing about teleportation is the infinite directions you can move in. As with my MaCall Prophecy Trilogy, I wanted to keep the paranormal part relatively believable.

How Did You Come up With Your Characters?
Eva Sokolov created herself. She’s extremely driven and typically serious. Her sense of humor is dry and sarcastic. I felt that these characteristics balanced well with her background in the ballet and her career as a detective. But when it came to creating a love interest, I wanted to explore the contrast between the two protagonists, like I did with Jac MaCall and Will Archer in Firstborn. Eva’s much more serious and driven; Nate’s clumsy and dorky. But he complements her well, even bringing out her playful side on occasion.