You are here: Home / Fiction / Action & Adventure / Edge of the Desert by John Matthew Stritch 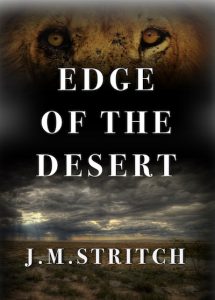 Life in the deserts of South West Africa is never easy for the lions. As the dry season drags on, game becomes so scarce the desert predators must search for alternative food. Man.

For Johan running supplies to remote desert outposts is easy. That is until the lions come. Having tasted man they are insatiable. Things keep getting worse too. When fire hits Johan becomes separated from his team. Depending on Sani, a bushman, he sets off to find his people.

Nearby Henry Scott searches for a new trade route through the vast sands of the Namib. For Johan and his men their only chance of survival is to join the expedition.

Part 1 of the Desert Series.

What Inspired You to Write Your Book?
I recently visited the Namib desert and loved the place. I also read the book the man eaters of Tsavo and watched the film the ghost and the darkness. My aunt is a big fan of diamonds and I love 1800’s Africa. I wanted to combine all these to create a compelling and believable story. I also wated to put my zoological knowledge to good use for scenes when the lions and other wildlife are present.

How Did You Come up With Your Characters?
The main character is on his own mission, much like myself. I added elements of me such as he view on wildlife. He just evolved from there. Other less prominent characters are based loosely on people I have worked with in the field.

Book Sample
Atop his wagon box Lovis spun around to face the sound and opened fire with a few awfully placed shots in the general direction of the uproar. Grasping for his dagger as he was pulled along, the unfortunate victim tried desperately to stab at the beast, but it was too late. No one saw her as the second female rushed in from behind to silence his screams with a bite to the neck. Lovis didn’t even see the direction in which they dragged the victim’s torn and bloody body.

The camp was now wide awake with the uproar and stood on edge in the abruptly silent night. The only sounds were the crackling flames and the frightened lowing of the oxen, which somehow seemed magnified tenfold in the sudden stillness. Lovis, rifle in hand, dropped down from his perch atop the wagon to the perceived safety of the watch fire burning away brightly. With his back to the fire, he did not hear the male lion approach from behind him.

The lion let out a spine-chilling roar as he leapt through the flames, alerting Lovis. Spinning to face the flames Lovis managed to let off a single shot. It struck the lion’s massive forelimb before Lovis rolled aside. The lion landed in a heap on the fire in a shower of sparks, but was on his three good legs immediately and bounding for the sentry before he himself could even get to his feet. The shattered limb slowed the lion’s charge however, prolonging Lovis’ fate. His rifle lay tantalisingly just out of reach after rolling aside. Unsheathing his dagger Lovis braced himself against the charge. With another leap, the lion hurled himself once more at the virtually defenceless man.

Lovis unflinchingly stood his ground, knife outstretched in front of him. As the bulk of the beast slammed into his chest it sent him crashing to the ground. The sentry thought he was done for, the dagger had gone in but he knew it wasn’t enough to end the beast’s life. He prepared for the final death bite he knew was about to swiftly spell his demise.

Buy Edge of the Desert On Amazon