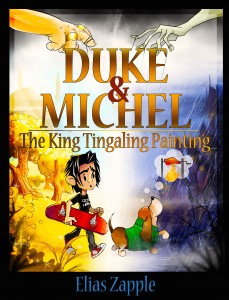 Duke & Michel must rescue Michel’s family and Duke’s Premium Nibbles from the villainous Master but end up becoming pawns in a battle between the Master and King Tingaling, who is still royally riled over a portrait of him in a compromising position with a pineapple, a wad of cash and his favourite pig – Buttercup.

What Inspired You to Write Your Book?
This is the sequel to Duke & Michel: The Mysterious Corridor and, just like Star Wars, there were more questions to be asked, more answers to be answered and more Country Dog – Premium Nibbles to be nibbled.

How Did You Come up With Your Characters?
They already existed from the first book, except for the character, King Tingaling. King Tingaling is based on Prince Philip. (Not really).

Many, many flavions ago on a planet super far away, and much farther than any Star Wars planet…

“Rejected! Again!” said the tall, eccentric-looking, grey-haired man with long thin fingers, who held a letter in one hand and a paintbrush in the other. He kicked away his easel to the corner of his art studio, and then shook the letter in the face of his son, a lanky boy with a dandruff problem. “Every art college on Painters’ Planet has now rejected you! Are you happy? You’ve brought great shame upon the von Virst family name, the most respected family of painters ever to have existed! You have no right to call yourself a von Virst. The shame, the shame of it all!”

“Mr Salvador von Virst! Sir!” A dwarf-like person came scurrying into the art studio holding a telegram – a bit of paper with a message on it. “Sir, King Tingaling from the Royal Globe has sent you an urgent telegram.”

“What does it say?” Salvador von Virst flicked bits of dried paint onto his scowling son.

“He urgently commissions you, the planet’s greatest living artist, to paint a portrait of him.”

“Well, I’m not really in the right frame of mind to paint another one of my glorious portraits, because of this worthless imbecile.” said Salvador von Virst pointing at his son. “However, we cannot refuse a commission from the Royal Globe, and certainly not from King Tingaling – The Laughing King. We must make haste! The Royal Globe and its vain monarchs are our main source of income. Without their portraits we’d cease to be, and without our portraits they’d die – of humility probably.”