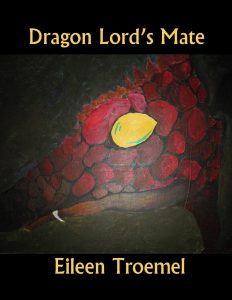 During spring rites, Dragon Lord Arius claims Pena, a healer from the Plains. He likes her small body, flame hair, and spunk. Pena wants nothing to do with the Dragon Lord. She wants love and comfort. Arius carries her away from her Plains village. The shadow dragon rises, reaching out his power to aid Pena’s enemy, Indirez. Betrayal within the Dragon Clan endangers everyone that Pena holds dear.

What Inspired You to Write Your Book?
I love to read history and study why people do what they do. One of the aspects of history I find interesting is the way tribes / groups did the raiding / pillaging. This book came from the thought of what would it look like if the raiding / pillaging stopped but they continued to go out each year to find new mates. From there, I came up with the premise that most of the women would eagerly line up to find their mate except my main character who wanted love and wanted to be left alone.

How Did You Come up With Your Characters?
Pena is one of my favorite characters. She’s part innocent, part wise woman, and definitely strong willed. Arius wants her on sight and she wants nothing to do with it. He’s strong tough alpha male. He has to learn how to compromise in order to not break his mate and she has to learn how to stand up for herself and trust. They have to come together to conquer the evil. Indirez isn’t evil per se to start the book. She’s spoiled and bad. She likes her way. I found writing the bad girl in the book fascinating and challenging.

Book Sample
The rolling hills gave way to steep roads, and finally to narrow switchbacks. Arius always walked on the outside of the track, keeping Pena near the wall of the mountain. He’d instructed Maka to have Indirez at the front of the company as far from Pena as possible. He didn’t trust her.
They walked rather than ride the horses in the steep sections. There were two sections, Arius had told her as they’d gotten into the mountains, prone to rock slides and were very narrow. They were approaching the second one. Indirez’s wagon had barely fit through. Arius and Pena were the last two. He walked very near her, Capal’s reins in his hand.
Capal jerked, whinnied nervously. Arius looked at the horse and then up. He dropped the reins and pushed Pena into the wall. She hit the wall hard, knocking the air out of her lungs. She felt Arius jerk as a rock hit him. Fear flashed through her, she dug her fingers into the wall behind her.
Bright light burst out around her and Arius. Thunder sounded as rocks tumbled down and over the two. Pena’s fingers clung to the rock as Arius clung to her. Dust hung thick, choking them.
Arius?
He didn’t respond immediately. Coughing and shouts rang out from the others. She could hear rocks being shifted slowly. Blood dripped onto her shoulder. She blinked away the dust to look up into Arius face. His eyes were closed, a gash on his head streamed blood. She put her hand on the gash and pushed energy and light towards him. She hummed, everything seemed to vibrate within. The song came to her. The gods sleep tonight. Worry none as they rest their tired bones. The gods sleep tonight. See the sprinkling of their tears in the skies. The dragon’s fire forged our world but they sleep until they are needed once more. She didn’t know where the words came from but she kept humming and singing them to Arius.
“I love it when you sing to me, misla,” he whispered hoarsely.
“Arius,” she sobbed clinging to him with relief.
“You’ve saved me again,” he said against her lips.
“You saved me first,” she met his kiss.
“Wouldn’t you know,” Xand said loudly. “We think they’ve died in a rock slide and they’re just too busy kissing to answer us.”
Pena blushed and laughed. Arius turned to look at the damage. He saw Indirez smirking nastily before she turned to go further up the trail.
“What happened,” Arius asked Xand.
“I heard Capal give a warning and turned in time to see a huge slide of rocks plummeting towards you and milady. Then there was this bright light, like sun glinting on glass, and all the rocks seemed to slide around you.
Arius turned to help Pena over a larger rock. She took his hand and blood smeared. “You’re hurt,” he said.
“No, it’s your blood,” she thought still dazed.
“You used the other hand on my head,” he looked back at where she had been crushed into the rock. The rock had turned a different color and her bloody fingerprints seemed to be embedded into the rock. He turned her hand over and poured some water on it. The tips of her fingers where the scars were seemed to have all broken open on both hands.
“What did you do, Pena,” he asked softly. He noticed she was paler than normal for performing a simple healing. With a sigh, she sat down heavily on the rock.
Xand and Arius both supported her. Her eyes fluttered closed, she took a shuddering breath and then seemed to come back from a long way away. “You shoved me into the rock. I didn’t see what was happening but then you got hit. I had to do something. I remember thinking if I could project a different path for the rocks. I couldn’t move. I dug my fingers in,” she looked at the tips as if she was seeing them for the first time. “I felt the strength of the mountain. It spoke to me. It gave me its strength, enough to push a wall between the falling rocks and you.”
Arius and Xand exchanged a look. “The mountain spoke to you?”
Xand covered her hands and gave her some healing energy. The bleeding stopped and the scars looked more normal.
“It’s old magic,” Xand said softly so no one else could hear but Arius.
“I know but she isn’t from the mountain,” Arius said.
“You are. She was most concerned with saving you,” Xand said.
“What are you two talking about?” Pena asked.
Arius and Xand warred with their eyes. Finally Arius said, “There used to be people who could speak to the elements. It’s very old magic. No one in generations has done it.”
“Is it a big secret?”
“Yes,” Arius said. “We won’t speak of it right now. I’ll tell you more after we’re settled in the keep.”
“Is Capal all right?” she asked.
Xand looked at the horse and the spread of rocks, “I’ve never seen a rock slide be so narrow.”
Arius saw the slide covered about three feet on either side of where he had pushed Pena. Arius, don’t say it. I feel her power but there’s nothing I could do to prove it.
“It appears to be a day for strange occurrences.” Warning Xand not to say anything further.
“Let’s clear a path to get Capal through.” Xand said more loudly so the others could come forward to help.