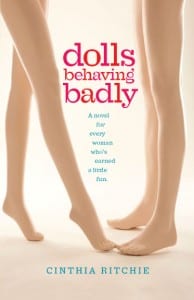 She’s one overdue bill away from completely losing control–when inspiration strikes in the form of a TV personality. Now she’s scribbling away in a diary, flirting with an anthropologist, and baking up desserts with the ghost of her Polish grandmother.

Still, getting her life and dreams back on track is difficult. Is perfection really within reach? Or will she wind up with something even better?

How is Writing In Your Genre Different from Others?
Well, “Dolls Behaving Badly” is different because it’s set in Alaska (think of “Sex in the City” meets “Northern Exposure”), which is like nowhere else. One reviewer wrote that Alaska fills the book like another character, and it’s true: Alaska is that big, that imposing. It breathes around the story and the characters, squatting in the background, not always visibly but the nevertheless.

And, face it, the people up here are different. We’re more lax, less concerned with convention. We don’t care about rules and regulations; we don’t like anyone telling us what to do. We don’t worry about appearances as much, either, and fashion doesn’t mean a thing when it’s -20 and your car breaks down and you have to walk to work.

In “Dolls Behaving Badly” I highlight the seedier side of Alaska, focusing on working class people struggling with bad choices, bad jobs and bad housing. It’s a part of society not often recognized in women’s novels. Add the fact that I chose a single mother as the heroine, well, you have a whole new perspective not only within the genre but within Alaska literature as well.

Author Bio:
Cinthia Ritchie is a former journalist and Pushcart Prize nominee who lives and runs mountains in Alaska.

What Inspired You to Write Your Book?
I was a single mother working two jobs and always exhausted. One night as I sat in the bathroom reading, I saw (or imagined I saw) the ghost of my Polish grandmother. “Ach, Pudel,” she said. And the story came to me, just like that.