You are here: Home / Fiction / Fantasy / Does Harry Dream of Electric Sheep? by John Altson 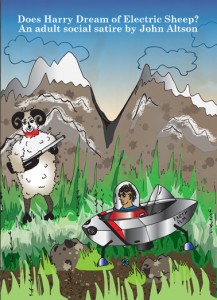 · A fantasy about a space explorer and his comical misadventures with sheep-like creatures which seem to mirror human behavior
· A tongue-in cheek comedy about life in the United States, circa 2014
· A serio-comedy which explores almost all of the current social and political issues
· A story with a moral

What Inspired You to Write Your Book?
It was time to write a Gulliver’s Travels sequel. This book was inspired both by Swift’s classic and by Orwell’s Animal Farm.

How Did You Come up With Your Characters?
The characters needed to represent the entire socio-political spectrum. I defined the spectrum, then plugged in the characters.

Book Sample
Carla seemed embarrassed. “That’s the 64,000 chip question. The Ohmys came about as the result of genetic changes to the pituitary glands. There were three ‘throw away’ species that were introduced before the Ohmys were successfully created. The ’78s’ had Baaner-sized bodies and enormous heads; they kept toppling over. We shipped them to Nowhereland. They may still be there, as far as I know.

The next experiments led to the creation of the ’79s’. These unfortunate creatures were no taller than one hoof. We thought of keeping them around to do useful chores for us, like acting as doorstops. They got underfoot, however, and died out after being inadvertently squashed.

The next species we created were the ’80s’. We almost got this one right. These creatures were the correct Ohmy size, but had excessively large brains in their posteriors, causing them to fall over backwards. We sent these off to Nowhereland also.

Let’s get back to our current genetic modification processes. I’m sure you’ve been to our grocery stores to buy produce. Have you noticed how beautiful our vegetables are? Bright green lettuce? Shiny red tomatoes? They look that way because of our genetic changes. They ship well too. They keep their color for as long as one week!”

Clarence jumped in. “I don’t think Harry has been to any of our grocery stores yet. What you say is true, Carla, but while the genetic changes have created better-looking produce, they have also taken away any semblance of taste. They are bland and boring. Not only that, the seeds from these plants are used over and over again in all of Baa. All of our produce everywhere is now tasteless!”

Buy Does Harry Dream of Electric Sheep? On Amazon