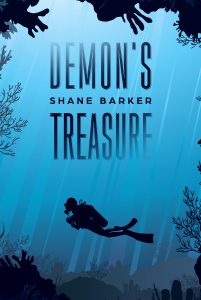 A fortune in gold and silver lies buried the wreckage of a lost treasure galleon. Fourteen-year-old Jansen is the key to finding it. Hungry sharks, menacing demons, and a raging hurricane block the way, but they’re the least of Jansen’s worries. He’s facing dangers more deadly, and more terrifying, than anything he can possibly imagine.

What Inspired You to Write Your Book?
I came up with the idea for this book while coaching a youth-football game. Don't know how that happened, exactly, except that I'm always thinking in terms of stories, and some of the best ideas come when I least expect them. The James Bond movie "For Your Eyes Only" has some great underwater scenes and those (along with the haunting theme song) got my blood pumping and wanting to write.

How Did You Come up With Your Characters?
All of my characters changed and matured as the book progressed. It's interesting for me to look back and compare my original images with their final personalities. One of the main antagonists actually turned out to be a good guy in the end, and one of the good guys eventually turned villain. One of my favorite villains is a huge, hulking creature my protagonist–Jansen–refers to as Kong. I have no idea where he came from. One day he was just there, causing problems and scaring the beejeebers out of everyone. I really don't know what inspired him, but boy was he fun to write!

Book Sample
Jansen swam toward several jagged timbers that curled up from the sand like the ribs of a horrible monster. There was a flicker of movement and he turned to see an enormous moray eel poke its head from a hole in the rocks.
Holy cow, he thought, fanning himself to a stop.
The eel was thick as a baseball bat, black as ink, rows of ugly teeth gleaming from a cavernous mouth.
Man, that’s no eel . . . that’s Eelzilla!
The enormous eel turned a vile eye upon him as if sizing him up.
Perhaps wondering how he’d taste for dinner.
Jansen couldn’t help feeling repulsed. He knew that an eel holed up like that could latch onto a diver, anchor itself in the rocks, and then hold on until the diver drowned.
An eel that size could do it, too, he thought. There’s no way you could get free of it. And even if you could, you’d catch some face-rotting disease from those slimy teeth.
Eelzilla watched him for another moment then–giving him a final, malevolent glare–slipped slowly back into its hole.
Jansen shivered again.
Okay, he thought. Important safety tip: stay away from the rocks!
He turned back toward the wreck and instantly spotted a large, coral-encrusted hulk.
A cannon!
Jansen swam quickly over and settled on the mud beside the huge gun. He reached out and touched the old, rusted iron.
Wow!
He was more certain than ever the wreck was the remains of a warship, a pirate ship, or a treasure galleon. He felt a thrill as he touched the cold iron. After all, it was one thing to see a pirate ship in a movie.
But to kneel on the bottom of the ocean and actually touch a gun that no one had seen in four hundred years . . .
That was awesome!
His imagination clicked into action, and in the silence he could almost hear the thunder and roar of the desperate sea battle. Could see the flash of guns and smell the acrid, eye-stinging smoke as it enveloped the ships. Could hear the shouts and screams of frantic men fighting for their lives.
This is so cool!
He looked around, spotting more timbers jutting from the sand. And in the middle of them–
Something moved over the wreckage. Jansen felt chills as he recognized it.
It was a shark–a sleek twelve-footer–gliding over the wreckage.
It was coming right for him.