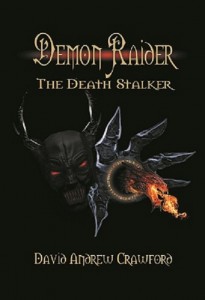 This is the second novel in the Dark Saga series entitled ‘Demon Raider the Death Stalker’ and it continues where Book 1 left off. Now with the first leg of his quest over, the second book starts out with Dark finally finding himself in the Dwarven City of Duergar, an instrument of revenge, seeking redress for wrongs done to him and his family as he begins to set his plan for vengeance in motion. Aided by the powerful artifact, the Eye of Dagda, he enters the city under the guise of Giacomo the Jester and sets out to destroy the Halflings’ Guild and its leader Sneak Longfoot, the Grand Master of the Guild.
Dark, using all his skill as an assassin and his powerful arsenal of magical items, causes murder and mayhem throughout the fortified City of the Dwarves. One by one the leaders of the Guilds and their followers will pay for the injustice carried out against his parents. Then and only then will Dark have peace in the knowledge that his parents have been avenged and all those responsible have paid with their very lives.

What Inspired You to Write Your Book?
This is the second novel in the Dark Saga series and is a continuation of my first novel. I need to continue telling the story of Dark Solus, a young boy whose parents were murdered when he was just a small boy. Dark needs to seek revenge for this and serve retribution on all those who were responsible for his parent’s demise. With the aid of his magical items and the help of his grandfather, a silver dragon, he sets out for the city of Duergar where he knows he will find all his enemies.

How Did You Come up With Your Characters?
I created the character of Dark Solus when I was a child playing Dungeons and Dragons. I used to play with several of my friends every weekend and Dark Solus was my character.

Book Sample
Now…where was I…ah yes I remember now.
When Dark awoke the next day, it was just dawn, the time that marks the beginning of the twilight before sunrise. The faint red and yellow slivers of sunlight had crept slowly over the land of Sommerset and as Dark made his way down stairs he saw his grandfather resting peacefully in his favorite chair. The tall dark figure sat there motionless, his deep set eyes black beneath his great brow. Dark knew Mephisto must have stayed up all night without any sleep. It almost seemed impossible that the old mage could be rested at all, yet he rose without stretching and still somehow the grim face of his grandfather looked relaxed and alert.
“Are you ready for this?” Mephisto asked at last.
“Just tell me the Styg was able to get me the information I asked for,” his grandson replied anxiously.
“He has indeed,” the old magus declared shortly. “And I think you will be quite pleased at what he has obtained.”
Without warning Mephisto took hold of Dark’s arm with urgency and propelled him through an opening in the cave wall that magically manifested itself upon their approach. Together they hurried through the still glowing stone archway and down a long hallway lined with magic sigils and symbols that glowed a deep red. They continued down the long, high corridor of his grandfather’s cave and up a winding staircase as the walls echoed with the rapping of their boots on the worn stone floor. Finally, when at last they were atop the stairway, he found the entrance was surrounded by a litter of blackened rocks, and what stood closed before them were two gigantic wooden doors, with no apparent handles or visible locks of any kind. They featured a pair of beautifully carved ferocious looking dragons, set here to guard what lay beyond. They crouched on clawed feet underneath enormous coils, their scaled sides slightly gleaming. Their large leathery wings were folded and their huge heads rested on their wooden perch as hooded membranes were closed over ancient eyes. Smoke curled from blackened nostrils, and as Dark watched, the two dragons both exhaled a ribbon of blue flame. All-seeing and ever alert, the dragons awoke and slowly they peeled their heavy heads from their wooden confines and both turned in unison to stare directly at the two intruders.
“Who dares to approach us?” The dragons gave a grating hiss, swaying over them, crested heads erect, as their golden eyes flamed and smoke shot from their nostrils.
“I am Mephistopheles, the Silver Dragon,” he shouted triumphantly. “Now let me pass and open the door, then rest your weary heads and slumber once more.”