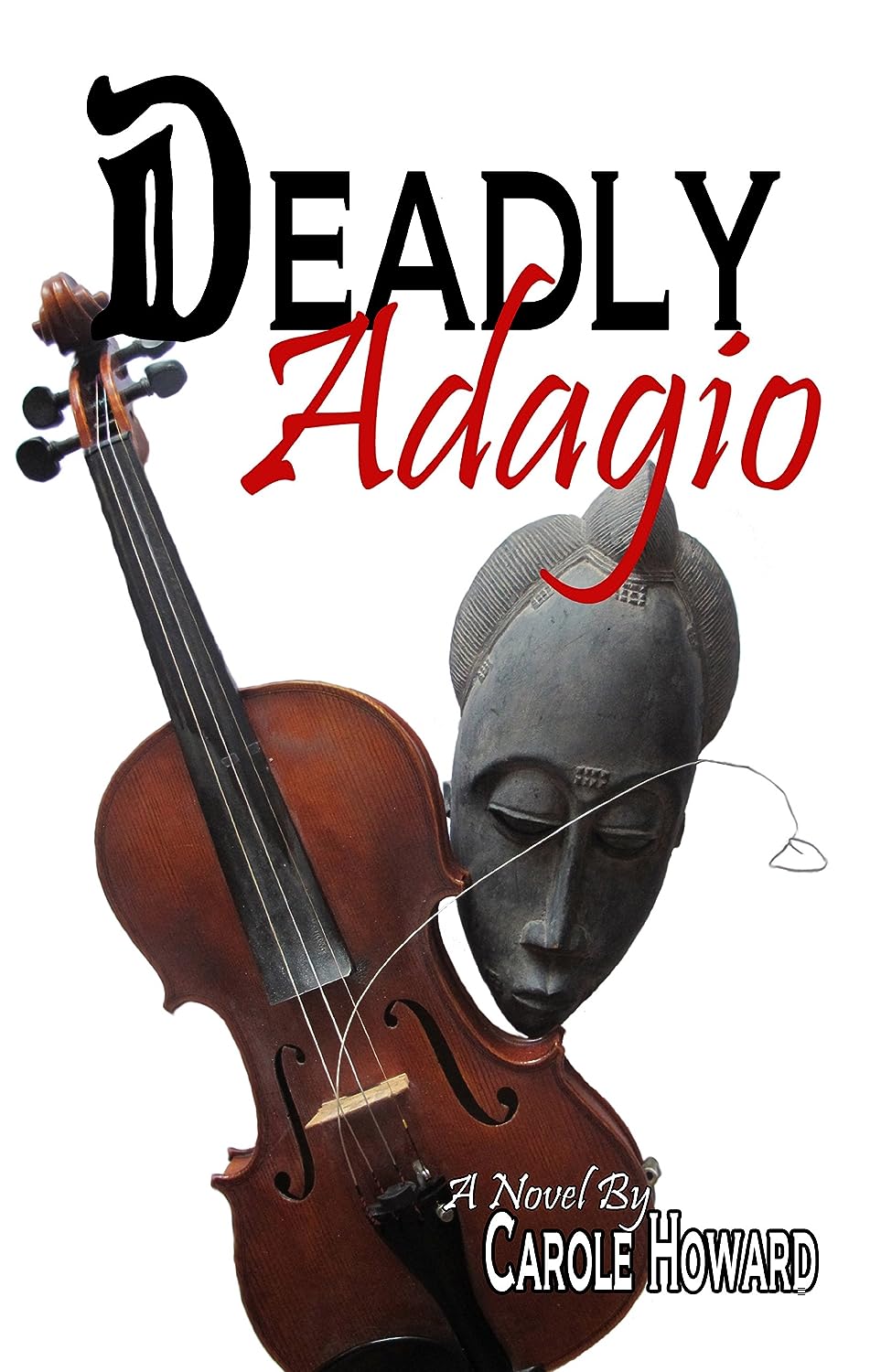 DEADLY ADAGIO is a murder mystery set in West Africa with a musical undertone.

Emily Radly chafes at being the wife of a U.S. Foreign Service Officer. When her friend and orchestra-buddy, the wife of the Peace Corps Director, is murdered, the official investigative team seems to jump to the conclusion that it’s random anti-American violence. Emily suspects it may have been something else, though.

Everyone tells her not to get involved in the investigation because it might put her in harm’s way. But she does. And it does.

What Inspired You to Write Your Book?
I’ve lived in West Africa and wanted to impart its sights, sounds, smells to people who are unfamiliar with it. I’ve also been in several amateur orchestras and I know most people are totally unaware of what goes on behind the scenes. There’s also the fascinating (to me) issue of cultural differences. Put those two elements together with the fact that I love a good mystery and…… voila.

How Did You Come up With Your Characters?
Every character is an amalgam of people I know plus a generous helping of imagination.

Book Sample
When they got to the village, they went straight to the cinderblock clinic to see Nora. She was busy with a pregnant woman, holding a stethoscope to an enormous belly and holding up her thumb and index finger. “Nyar,” she said with a grin. Emily knew from the market that nyar meant “two.” The woman was having twins, a harbinger of good luck.

Emily remembered what a shock it had been when her doctor told her she was pregnant with twins. Now, of course, she wouldn’t have it any other way. She shook the pregnant woman’s hand and gave her to understand that she was the mother of twins, too. They smiled energetically enough to make up for the lack of language.

Nora was much older than most Peace Corps volunteers. She embodied a certain solidity, echoed by her short stocky body. Her nose was big and hooked, her skin wrinkled, and her eyes far enough apart to sometimes give her listeners pause as to exactly where she was looking; but her self-possessed demeanor made no apology for her face, and that, in itself, made her attractive.

She took Emily and Walter to pay a courtesy call on the chief. He was old and withered but with a stature befitting his authority. The scarification on his face—which had undoubtedly been done at his initiation rite, some 50 or 60 or even 70 years ago—was elaborate and, in its own way, beautiful. The colorful embroidered cloths that were casually draped around him were similarly ornate.

Nora’s introduction was mostly in Wolof, with a little French thrown in. Emily only knew a few words in Wolof, but she heard ciif, which was easy-—it was Wolof for “Chief”—twice, once in connection with the village chief and once for Walter. There was Jere jef, of course, Wolof for “thank you.” There was an interchange whose words she didn’t understand but whose tone and body language were clearly related to her friend’s death and the chief’s sympathy. She wasn’t sure how Nora introduced her, though she thought she picked up the word ambassade.

Nobody paid much attention to her, so she let her eyes drift and her mind wander. She hadn’t been to many villages or huts, since Pete’s job mostly dealt with the housing arrangements of the American dips.

At first, she was diverted by the chickens and the children in the hut. They wandered from the sleeping quarters— marked by their mosquito nets, thanks to Nora—to the cooking area with its fire pit and oddly-shaped cooking implements, to the general open area where the kids and birds took turns chasing each other. She tried to concentrate on what few words she could understand. After a while, like the cooking smoke, her attention drifted upwards.

The roof was built with thin poles like bicycle spokes, but only some of them went all the way to the center, so there was an almost spokeless area of about one foot in diameter. Then the straw was laid on top of the spokes, all the way to the center, and loosely tied in bunches. The light peeked through the thatch, a bit stronger through the center hole, and so did the breeze, but not the bugs, and the smoke from the cooking fire drifted up and out, leaving only its smell.

She stared at it with her head tilted back and one hand behind her neck for support, as if she were looking at the starry sky on a camping trip. Did the Africans attend to the symmetry and balance during construction, she wondered, or was the beauty just a side effect of the functionality?

Something tugged at her pants. She got down to the tuggers’ level and started to talk to the kids, even though she knew they wouldn’t understand anything other than the universals: eye contact, smile, soft voice.

About the Author:
After a career in which her writing largely consisted of training manuals and memos, in which clarity was the holy grail, Carole is thrilled to be writing fiction and memoir. She lives in the beautiful and rural Hudson Valley of New York with her husband, and with her daughter, son-in-law and grandchildren just down the road apiece.

Carole gets around, having been to about 50 countries (so far), including eighteen months spent in Senegal, the setting for Deadly Adagio, while her husband was a Peace Corps Administrator. She has also been in several amateur orchestras, which is territory that, like a country, has its own language, customs, government, hierarchy, and sub-groups.