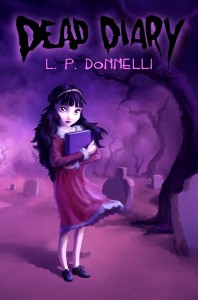 Dead Diary tells the story of Mathilde, a young girl who has to deal with the usual difficulties of growing up: such as problems at school, not being noticed by that special boy, and having to constantly help ghosts find their peace:

I’m tired. Dead tired. So tired I can barely stay awake to write this. After helping Mr Bircher search for his head all night, I’m a little annoyed too. Dad doesn’t help. He doesn’t know what it’s like for a girl my age, trying to fit in at school as much as possible, and trying to fit in all the dead people. It’s not easy being a soul helper.

And so her diary entries begin. Through the school term, Mathilde will learn important life lessons she will never forget. Realising that ghosts and people are not as different as she thought . . .

What Inspired You to Write Your Book?
The book was inspired by my love of diary format books, such as Adrian Mole and Diary of a Wimpy Kid. Also, my partner was a huge fan of the TV show Ghost Whisperer, and I thought it would be a good idea to create something similar but for a younger audience. As soon as the book title was written down, the story quickly developed from there.

How Did You Come up With Your Characters?
I had the main character of Mathilde in my head for some time. She is inspired by children in my family as well as those strong characters in children’s literature that are a similar age, such as Coraline. The character of Wednesday from The Addams Family came to mind as well. Always have a love for France, I wanted Mathilde to have her family roots in the country.

Book Sample
Monday 12th September
I’m tired. Dead tired. So tired I can barely stay awake to write this. After helping Mr Bircher search for his head all night, I’m a little annoyed too. Dad doesn’t help. He doesn’t know what it’s like for a girl my age, trying to fit in at school as much as possible, and trying to fit in all the dead people. It’s not easy being a soul helper. ‘I know, dear, they can be so demanding those dead ones, but I know you can do it, my little one,’ he’d say. Mum helps when she can, but she is always floating here and there and it’s hard to catch her. We tried her with a mobile phone, but it requires too much mental exertion for a ghost to hold anything for long, so she kept losing it. In the end, we gave up.
It wasn’t Mr Bircher’s fault, though. He is one of the nice ones. It seemed strange at first seeing him with a head – you know when you get use to someone as they are then they get a crazy new haircut or something. It is proving so very difficult to find what will release him. I promised to help all I can, but then Bobby needed to find his penknife he’d had as a child to be released and Mrs Marples needed help finding her lost husband to be freed. So much to do, so little time and I still have my homework to do. Algebra! Ghost help me!
Got to get some sleep and then go to the library tomorrow to catch-up. Tests are around the corner early next year and then there’s the School Ball! He better ask me. If he doesn’t I’m getting the scariest ghosts on him, I swear!
I hope this diary I’ve started for the new school year helps to keep me sane! I love writing, so I think it might.
Have to sleep, so tired, can’t stop yawning . . .

Saturday 17th September
I’m fed up with school. Fed up with it! If it weren’t for the library, I’d wish I never had to go back there. Every day always the same laughs and sniggers, like yesterday from Amber and her friends. Ghost, she is so annoying and stuck-up, why can’t others see that!?? Oh, look at me, I’m Amber, the prettiest of them all. Look at me I have the best nails in the world! Soooo annoying!!! It’s not my fault my nails are as brittle as dust. A fly only has to land on one and it breaks!
What’s her problem anyway? She never liked me and never said why. Her group of friends tease me, even when she isn’t there.
And I just cannot find time to do it all. Just spent most of the day trying to catch up on my homework and still I’m only half way through! Argghh!! And on top of that I got the ghosts circling my window, saying they need my help! I told them I just couldn’t right now, but I promised I would be back at the usual spot as soon as I could!
I really need a rest. My dad said he would make dinner tonight – he could see I was tired and gave me a hug. Just hope I’m not a ghost too by tomorrow . . .

Sunday 18th September
Just looked at the clock, it’s only 7.00 p.m. and I’m pooped. Did so much today, where to start?
Got up early and did some more of my homework, did more than I thought I would. I think I’m better in the mornings, well, I mean early afternoons. Nearly caught up now, just a few more things to do.
Then went to the Woods and asked them to keep to an orderly line so I could help everyone waiting. Ernie helped, bless him, by leading many of the ghosts to the other side of the Woods, telling them there was someone else that could assist them. There wasn’t! But at least it took the queue down to a more manageable level. The little scamp he is! Ha. Mr and Mrs Bircher helped too as much as they could. They made sure that everyone was patient. Not sure where Lucy was today.
Managed to release five, not bad for a Sunday, eh? I’m glad Mr Meller was one of them (Mr Smeller, Lucy called him), he was so grumpy! Turns out that the only thing he had to do was smile and hey presto he was free. Told him to think of something that made him happy – no idea what it was, but it worked as I thought it might. It sometimes works that way. It only dawned on me this morning to try it with him after weeks of putting up with his grouchy moods! I guess if he smiled at something he can’t be all that bad but that wasn’t the ghost we knew. Miss Herring also got freed. (She always smiled.) Will miss her but know she is happier now. Bobby went as well. Ernie might miss him, I think. Maybe that’s why he left early today. Oh and the Kings also went, as in Mr and Mrs King (not as in Royalty). Turns out that they just had to ghost-kiss to be free. They were always arguing before.
Then raced back home and did dinner for Dad and me, said a quick hi to Mum, who I saw outside doing some gardening. Made us delicious mashed potatoes and sausages – Dad loves it too! Love watching the knob of butter melting on the top before we tuck in. Yummy! I could eat it again right now, you know!
Sunday bath, to point of wrinkly fingers, then did a bit more homework until now. I’m bushed. Not looking forward to Monday! Why can’t the week start on a less painful day, like a Tuesday or Wednesday? Anyway, might watch some TV before I float off to dreamland. Hope he’s in my dreams again . . .

Wednesday 21st September
Need to write more in here! Just not found the time or the will to do so lately. I got the diary from the money Mum and Dad gave me, as I thought it might help keep me organised this school term. I so need to be more disciplined!
School’s been the same. Ghost, I could pull that girl’s hair out! Amber devil-girl. She knocked my tray of food all over the school canteen yesterday. Everyone was looking and laughing as I tried to clear it up. Thank ghost, he wasn’t there! Then Miss Turner stepped in to try to help (she always cries) and made me look even more sorrowful. Mr Palfrey told me off too for it! It was not even my fault! The injustice! I got angrier than I should have with him, which resulted in me doing lines – lots and lots of them. That’s why I haven’t felt like writing in here recently.
I swear it, if the ghosts knew about Amber, they would have her! But I don’t want to tell them. They have their own problems, which I’m trying to help with. I’m sure Ernie would have some wicked ideas. Lucy would kill her. Ghost! That would be hell, what if she died and then I had to help her?! Yeah, I better not tell them. The ghosts know they can’t see me at school and plus they don’ like big groups of people (it does something funny to them).
I need a good book to escape from school. I am going to ask Miss Mathews if she has a book about vengeance, ideally involving lots of hair-pulling!