You are here: Home / Fiction / Mystery/Suspense / Dawn of Deception by Dan Fletcher 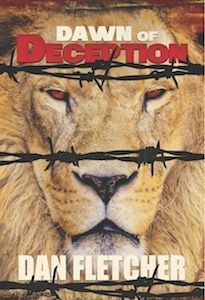 A routine patrol leads to the discovery of an international poaching racket and David makes it his mission to bring the perpetrators to justice. Kenya is in political and economic turmoil with widespread violence and acts of atrocity being committed by the government against the Kikuyu.

Who is Commander Peter Abasi, AKA Maliki, and what does he want with Professor Mutungi and the Committee of Human Rights? And where do freelance reporter Aaron Bernstein and Seymour Dewitt of the American Embassy fit in?

Amidst the turmoil David meets Caitlyn, the new vet at the elephant orphanage, as the heat intensifies will he be able to protect her?

What Inspired You to Write Your Book?
I was in Kenya in 1988 and met a Maasai called ‘Paul’ who had gruesome scars down one side of his face. I had to ask how he got them – Paul failed the lion hunt,his admission into manhood, and was ostracised by the tribe. He worked as a cook in Nairobi and was a gentle and warm soul. Paul had suffered so much and yet was so accepting of his situation it made me think what could have happened – this led to the creation of the twisted and evil Maliki.

How Did You Come up With Your Characters?
Based on characters I met in Kenya and on real personas discovered when doing research on the book.

Book Sample
He took his hand away from the device, “Ugly gentleman with scars down one side of his face?” the sergeant dragged three fingers across his cheek to demonstrate.

“Any idea what he was doing here?”

“He came to see the Deputy Director.” Ngozi flicked a nervous glance at Tanui’s door, “It was something to do with that baby elephant you brought in. He had a copy of the newspaper with him and was waving it around.”

David had read the article in the staff canteen whilst eating breakfast. Although it was aimed to tug at the reader’s heartstrings he had to admit that it was well written. Bernstein managed to bring across his outrage in a good balance of fact and fiction.

The sergeant must have realised that he had said too much. His hand went back to the intercom, “What shall I say it’s regarding?”

“On second thoughts don’t bother, there’s no point disturbing him.” David held the file out holding his report. “I only wanted to give him this, could you do that for me?”

Ngozi smiled as if Tanui would appreciate the gesture of being left alone, “No problem sir, I’ll make sure that he gets it.”

“Thank you sergeant,” David turned and walked away down the corridor.

Buy Dawn of Deception On Amazon