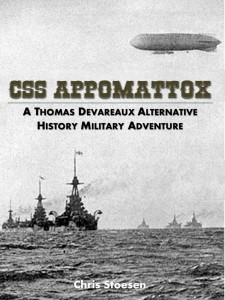 In October 1862, the Confederacy is recognized by both France and Great Britain. Lincoln opens peace negotiations that effectively ended the American Civil War. Decades later, the young Confederacy forges an alliance with Spain – a fading empire desperately clinging to its remaining Caribbean colonies.

The Confederate Military assigns the young crew of the airship CSS Appomattox to assist their country’s new ally. The Appomattox is dispatched with a token Naval force to defend Puerto Rico. Here they will stand against the coming threat of an expansionist German Empire and its ally, the United States.

The crew of the Appomattox not only has to fight against the German military, but forces from within their own navy as well. During their exploits, Devareaux and his crew are recruited by the Signals Bureau (the Confederate Secret Service) to battle their enemies overtly as well as covertly. They encounter enemy agents who seek to do in the young nation through their efforts with espionage.

The action takes place in the skies above the Caribbean and on land as Devareaux leads his landing party of marines to support the guerrillas fighting in the hills of occupied eastern Puerto Rico.

The CSS Appomattox is a work of alternative history fiction, concentrating on the adventures of the naval airship commander Thomas Devareaux and his crew. The action takes place in the air, over sea, and land as our heroes battle in defense of their country. This is the first book in the Thomas Devareaux series. This Alternate History novel employs elements of Steampunk without taking historical technology developments too far outside of their historical progression.

What Inspired You to Write Your Book?
I was interested in looking at an alternative history scenario where the South won the Civil War and what was happening 20 years later. But also, I wanted to write an action book dealing with a combat unit on the front lines. I saw a couple old pictures of early airships and the idea just gelled.

How Did You Come up With Your Characters?
The characters kind of came out of looking at the technology first. I looked at an airship from the late 1800s and early 1900s. I made a guess at what a crew would look like and that became the initial cast of characters. I think spent time fleshing these men out. Who were they? Where did they come from? That birthed several minor characters to the story. That is actually how many of the bad guys were born.

Book Sample
Bridge Access Hatch
Down the ladder he slid. With his hands and feet pressing on the outside of the ladder, Devareaux was able to rapidly descend from the Observation Deck, through the airbag and down to the Bridge access hatch. With a crash, Devareaux bounced off of the deck as he landed. He snatched up the hatch and just jumped in through the opening. He moved and plugged his respirator into the air duct and sucked in another great lungful of air.

He turned and saw the civilian who had been assigned to join him on this first cruise of the Appomattox. What Devareaux knew was the man was part of the design team that built the airship and had requested to be sent along to learn what design flaws needed to be corrected.

Devareaux examined the young engineer. The man’s hair was an unruly mop that jutted above his thick goggles. The man had a custom respirator mask that lacked built in goggles. The hose for his rebreather ended on a tube like device and did not need to be connected to the shipboard oxygen concentrator system. He, unlike the rest of the crew, had complete freedom of movement about the ship when they were at altitude. Now the device did need to be periodically charged at a rebreather station but the advantages were legion.

Despite his youth, Tobias Whytherspoon was a first class engineer. He had helped his father perfect the current Confederate Winans Steam cannon. Thanks to his work they had fixed the pressure issues that allowed the earlier weapon to be able to fire at such a distance as to become practical but also lightened it significantly to enable it to be placed aboard an airship.

Tobias blinked his large eyes at the Lieutenant. Devareaux placed a hand on his shoulder and squeezed.

“Tobias, are you sure those damn British rockets are safe? I don’t want to kill the enemy and set us on fire as well.”

Tobias’ nasal voice responded with confidence in his ability.

“Well, captain, that will not be a problem. We have reconfigured the rocket bay. We have two tubes on each side. We can fire without any worries. We have established fire control systems in case of accidents. It should be completely safe or at least as safe as a ship in combat can be.”

Devareaux had stopped listening and began moving again. He looked at his bridge crew. There was the Midshipman of the watch Powell, and his senior enlisted. The bosun, the Engineer and the gunner were all present. The crew of the Appy was just a mere twenty-eight men plus the civilian engineer. Tobias was only present since it was their first cruise.
Taking the helm from Midshipman Powell, Devareaux checked the wind and saw that the sails were well trimmed. Satisfied, he pushed the throttle to full power to head toward the enemy.

He reached into his pocket and withdrew the trusty Waltham watch. There was a deep gouge on the coin silver case and on the crystal beneath. He marked the time and quickly estimated how much longer until the engagement. He spoke into the repeater on the circuit for the whole airship.

“Now hear this, we are five minutes to contact. Port Rocket Battery, fire on the closest of the airships as soon as you are in range. Bow battery, rake the City class airship as we pass.”

He turned the wheel slightly to pass above and to the right of the enemy formation.

The crew waited as the airship lumbered slowly on its path. At this point they had been unnoticed, but that would not last.

“Captain, they have spotted us. Lead airship turning five degrees toward us and clawing for altitude. They won’t be able to get to us in time.”

“Thank you, Midshipman Powell. Take note of the enemy surface ships, if you please, and prepare a report.”

He watched the enemy formation as he closed the distance and increased the ship’s altitude to compensate for the enemy’s maneuvering.

Powell moved to a cabinet at the rear of the cabin and withdrew a few sheets of paper containing the silhouettes of the current German fleet. Then, taking a pad of paper and a pencil, he secured the cabinet and returned to the observation window and his telescope. Shortly thereafter he began taking notes.

He was taken by surprise when he saw the streaks of light and the thump of the Bow Winans gun begin to fire. The gunner was a bit premature and the rounds arced out and came short of the target. The firing stopped after a short five second burst.

Bow Winans Battery
The bow gun room was packed tightly with equipment. The gun itself dominated the space. At the back of the weapon, the gunner stood in his harness with his knees bent. He was stripped to the waist, as were his assistants. Each sweat profusely as the heat from the steam gun made the air nearly shimmer. Hissing steam bled from the safety valves on each of the accumulator tanks. This created the oppressive heat that forced the men to strip out of their cold weather gear. The slightly cooler air from their rebreathers was the only thing that allowed them able to remain at their stations in the gun room.

The profanity was muffled by the rebreather.

“We missed. Boys, we need to lead them a bit better with this string.”

Stoe was a talker. He was the only one responsible for aiming the weapon. His loaders had input on the placement of the
shots but they were used to his non-stop prattle.

The other two men were in a constant state of motion, loading the tubes connected to the collector tanks that lined the walls of the room. Lucius carried two tubes at a time to the loading port. As soon as Stoe paused in his firing, Petrus would take the tube from Lucius and mate it with the loading port and feed in the replacement ammunition. So far two empty tubes lay discarded to the side after the first string of shots had been released against the enemy.

Knowing it was too soon, the gunner adjusted. The glass bubble that surrounded the gun and gunner moved as he flexed his knees. Judging the distance again, Stoe grabbed the firing lever with his right hand and squeezed the safety and pulled back on the lever as he counted.

Bridge of the CSS Appomattox
On the bridge, Devareaux spoke to his crew.

“We will turn behind them and attempt to run back to San Juan after this first pass. We have done our job and found the enemy.”

Another minute went by before the bow gun barked again. This time Devareaux could see the phosphorous rounds arc out and down toward the enemy airship. The first few rounds fell short, but the last second of the burst impacted with the bow. He could not see any definitive results of that first strike. The Winans gun barked again and this time the entire five second string hit the airship.

The Hamburg’s bow Gatling battery began to respond and fired up at the Appy. The bridge crew could see the tracer rounds rising to meet them. The German gunner knew his business and was aiming right for the bridge of the Appomattox. But he did not quite have his shot lined up correctly. Midshipman Powell was standing near the glass with an eye to his telescope making note of the surface fleet. Devareaux unplugged from the rebreather and grabbed the young man by the shoulder and hauled him away from the window.

“Powell, pay attention to what is going on around you as well as your assignment.”

They heard and felt the impact of the rounds beneath their feet from the Gatling gun, which did much to emphasize Devareaux’s point to the young man. Powell stepped back from his exposed position by the window glass and resumed his observations on the fleet but now kept an eye out for other danger as well.

Quickly regaining his console, Devareaux plugged back in and barked in his repeater.

“Aye, aye,” bubbled an excited response from the repeater.

Bow Winans Battery
Stoe looked out of the glass bubble to find his new target. He could see the tracers coming near him in his position forward and beneath the bridge. The noise of the steam pipes and the pressure concentrators eliminated the sound and vibration of the impact of the Gatling rounds.

Seeing his target, he adjusted for the distance and motion. Sweat streamed down his naked pale back and he fired his gun.