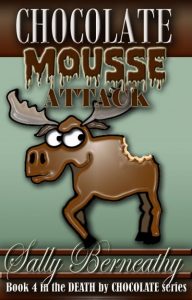 Chocolate Mousse Attack
Book 4 in DEATH BY CHOCOLATE series
A phone call at two a.m. is never good news. But there’s bad news and then there’s strange news. Lindsay’s two a.m. call is a plea for help. There’s a woman in Fred’s closet and he can’t get her out.
Their new neighbor, Sophie Fleming, has taken up sleepwalking, straight into Fred’s house and his bedroom closet. She’s having nightmares about the brutal stabbing of a little girl named Carolyn. But Carolyn was her imaginary childhood friend.
Lindsay, Fred, Trent, Paula, and Henry must solve a twenty-year old murder with no bodies, no DNA and no proof the victims ever existed.
How can someone who never lived be murdered? Why is Sophie seeing it happen in Fred’s bedroom? Why is she hiding in his closet? Will his clothes even fit her?

What Inspired You to Write Your Book?
In Book 1 I created an empty, scary house across the street from Lindsay and Fred. That house needed a buyer, and that buyer needed a secret. What if that buyer had lived there before and witnessed a murder but didn't remember it? I've always been fascinated with stories about amnesia. After being around for three books, Fred needed a woman, so her secret should be connected with his house.

How Did You Come up With Your Characters?
This is the fourth book in my Death by Chocolate series, so I already had the main characters: Lindsay who makes chocolate desserts in her shop, something I've always wanted to do; Fred who lives next door to Lindsay and is based on a friend I went to high school with who, like Fred, periodically reveals a new talent never before suspected; Paula, Lindsay's best friend and co-owner of their restaurant who is calm, rational, and tries to keep Lindsay from getting in trouble; Adam Trent, the detective Lindsay can finally date since her divorce from Rick is final. Rick's son returns in this book as the demon child he was in The Great Chocolate Scam, but he does something unexpected. Sophie emerged because, as the buyer of the old house, she needed to be the exact opposite of that house. She is serene, composed, and beautiful.

Book Sample
Henry woke me a little after two a.m., leaping onto my chest and yowling. Obviously the soothing effects of his catnip had worn off.
“If this is Sophie doing her nightly visitation thing again, you’re cut off catnip for the rest of your natural life.”
He leaped off the bed but instead of going to the window that looked out on the street, he went to the side window where he stood with his paws on the sill.
I went to the window and looked out at the trees that separated my house from Fred’s. It was a beautiful moonlit night and a soft breeze stirred the leaves.
Then the leaves on a branch close to the house shuddered wildly. Considering everything that had been going on, that was a little creepy. “You better not be carrying on about a raccoon or a possum,” I warned, though I was seriously hoping to see a pointy little face appear among the leaves. Better than the alternative.
That’s sort of what happened. Rickie, dressed in T-shirt and shorts instead of pajamas, crawled out of the foliage and reached for the window sill of the guest room.
“Hey!” I shouted.
He fumbled and almost fell but grabbed the window at the last minute and pulled himself up, disappearing inside.
I charged out of my room and down the hall to the guest room door. Silly me, thinking I could control Rick’s son by just telling him he was locked in a room. If there hadn’t been a window, he’d have tunneled out from the second floor.
I yanked the door open and he fell into my arms.
“He’s after me!” he shouted.