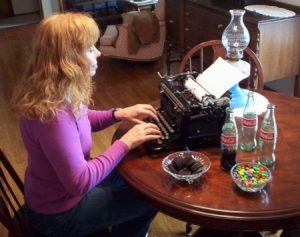 About Sally Berneathy:
I grew up in a small rural town where our favorite entertainment on summer evenings was to sit outside under the stars and tell stories. When I went to bed at night, instead of a lullaby, I got a story. That could be because everybody in my family sings like a bullfrog with laryngitis, but they sure could tell stories—ghost stories, funny stories, happy stories, scary stories.
For as long as I can remember I’ve been a storyteller. Thank goodness for computers so I can write down my stories. It’s hard to make listeners sit still while I tell them a whole book! Like my family’s tales, my stories are funny, scary, dramatic, romantic, paranormal and, I hope, entertaining.
Besides writing, my interests are reading, eating chocolate and riding my Harley.
I have two ongoing mystery series, Death by Chocolate and Charley’s Ghost. Death by Chocolate and The Ex Who Wouldn’t Die are USA Today Bestsellers.
Contact information is available on my website. I love to talk to readers! And writers. And riders. And computer programmers. And teachers. And gardeners. And dogs. And puppets and poets and pirates and pawns and kings. Okay, I just plain love to talk! And write!

What inspires you to write?
Everything that happens to me, everything I see and hear, every movie I watch…everything inspires me to write.
After a decade of writing romances for Harlequin/Silhouette, I decided to follow the admonition “Write what you know.” I’d been through three divorces, so obviously I know nothing about romance. But I do know about chocolate, cats, and murder. Well, I’d never actually murdered anyone, but I’d fantasized about killing my ex a lot of times.
I wrote Death by Chocolate and decided to try the new Indie publishing phenomenon. I had no idea what I was doing. I just put the book out there and waited for people to find it. It sold about fifty copies the first month. That was depressing. I decided to start a new series.
As I sat at my desk, looking out the window and thinking of what I should write about next, my cell phone rang.
My most recent ex.
Divorced ten years and he was still stalking me.
He was never going to leave me alone! And he was never going to die. And even if he did die, his ghost would come back and haunt me.
That inspired me write The Ex Who Wouldn’t Die.
Then both books started selling well and I get e-mails from readers saying they like my books, and that inspires me to write more in each series!

Tell us about your writing process.
I am a total pantser. I start with a big picture idea. When I conceived Death by Chocolate, I knew my heroine would have a chocolate dessert shop (something I’ve always wanted to do), she’d be struggling to get rid of her ex-husband (something I was struggling to do), she’d have a mysterious neighbor (inspired by a real person, a friend I went to high school with), and another friend who was running from her abusive husband (inspired by my ex).
Each event in the story is as big a surprise to me as it is to the reader. Each event follows logically from the last. When nothing exciting is happening, I write fluff…the ordinary details of the character’s life. She gets out of bed, she eats breakfast, she takes a shower…and soon something exciting happens. Then I go back and delete the fluff.
I take each chapter to my critique group as I write it, and they tell me when something works or when it doesn’t. I make their suggested changes and write on.
As I move into the last half of the book, magic happens. A small detail in Chapter 3 or 4 suddenly becomes the necessary key for a major event in Chapter 12 or 14 or 17.
When the first draft of the book is complete, I do three or four rounds of revisions then send to my editor. After she finishes with her edits, I do another round of revisions then a final round of copyedits.
When I wrote for Harlequin/Silhouette, I knew my editor had my back. I didn’t have to worry that a character’s eyes would change color during the course of the book, a house would acquire or lose a bathroom, or a typo would make it into print. With Indie publishing, that’s all on me, and it’s a little scary! My self-imposed rule is the final round is nothing but copyedits. No revisions allowed. I broke that rule when I wrote The Great Chocolate Scam. I added a parenthetical phrase, eight words. No big deal, right?
The situation: My heroine served gluten-free cookies, nut-free cookies, and regular cookies to various customers.
The sentence with that added phrase: “I gave the right cookies to the right people (later confirmed because nobody went into anaphylactic shock) then came back to the counter.”
Well, that’s what I meant to write. But it was after midnight and I was tired. What I wrote was: “I gave the right cookies to the right people (later confirmed because nobody went into prophylactic shock) then came back to the counter.”
The book sold several thousand copies before a kind reader sent me an e-mail pointing out my error.
I no longer edit my books after midnight.

For Fiction Writers: Do you listen (or talk to) to your characters?
My Death by Chocolate books are written in first person from the POV of Lindsay. Charley’s Ghost books are written in the deep third person POV of Amanda. I become completely immersed in the character of whichever book I’m writing. I go beyond talking to them. It’s more like I’m possessed by them. I don’t talk to the secondary characters; however, Lindsay and Amanda and I talk about them a lot. We discuss what’s going on with them and how we feel about it and what we think could happen next.
We also talk about the events of my regular life. One time I was at the grocery store and picked up a jar of spaghetti sauce. “This sounds really good! Look at the ingredients. Peppers! I think we should try this.”
I didn’t realize I was speaking aloud until the man a few feet down looked at me, eyes wide and frightened, then hurried away.

What advice would you give other writers?
1. Turn off your inner editor and give yourself permission to write junk. Puke it out. Then go back and fix it. I love Robert Cormier’s quote: “The beautiful part of writing is that you don’t have to get it right the first time, unlike, say, a brain surgeon.”
2. You do have to get it right eventually. Get with a critique group. Listen to every suggestion they give you. Over the years I’ve ignored maybe .01% of the suggestions of my critique group. The rest are gold.
3. Finish your book. All writers get great ideas for other books on a regular basis. Don’t put your current book aside to write that next great idea. Make a note on a piece of paper or a Word document and save it for the next book.
4. The reason those new ideas are so alluring is that, after we write the first three or four chapters, the initial excitement wears off and suddenly we have to work. We have to come up with events that logically move the book to its conclusion. The dreaded middle is…dreadful. And it separates the published writers from the wannabes.
5. Strive for realistic dialogue. Forget what your mother taught you and eavesdrop on people.
6. Never stop learning. Go to writing conferences, attend workshops, read writing articles, talk to other writers, join a group. Always strive to make your current book the best, then strive to make your next book better.

How did you decide how to publish your books?
I wrote fifteen romance novels back in the ’90s and always worked with traditional publishers, primarily Harlequin/Silhouette. My editor at H/S was wonderful, and I learned most of my writing skills from her. However, the publishers had a lot of control over what I wrote. That too was a learning experience, but it was often frustrating.
In 2001 I stopped writing to get a regular job as a computer programmer. Long story. All about getting a divorce from the ex. Do we have time for another story here? No? Okay. Moving on.
In 2011 I left that job to get back to writing. I knew I wanted to write mysteries instead of romances, so that closed all the doors I once had. Another writer said she’d just self-published a book. How did you do that? I think I’ll do that! I had no idea what I was doing, but I learned, and it’s been a great experience for me.
My advice to new authors would be to sell to traditional publishers if you can. You will learn so much. If not, take writing classes, go to workshops, read articles, listen to your critique group, and get a lot of feedback and professional editing before you self-publish. Many Indie-published books are wonderful, but some are awful. I shudder to think what might have happened if that option had been available when I started writing. I couldn’t believe the publishers rejected my first two books! What was wrong with them? There was something wrong all right…with those “books.” (I use quote marks because I now think of those things as compilations of pages, not books.) But I might have self-published them if I could have. How embarrassing that would have been! As I learned more about writing books, I knew those pages were horrible. I destroyed all extant copies. Fortunately I could not publish them on the Internet where they would live forever and I’d have been forced to get a new identity, change my name, and have plastic surgery when I began to write good books.

What genres do you write?: Uncozy Cozy Mysteries (formerly romance and romantic suspense)