You are here: Home / Fiction / Women's Fiction / Chick Lit (And Other Formulas For Life) by Abby Rosmarin 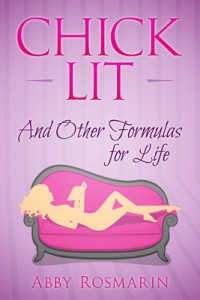 It’s 2005 and Katy Sinclaire is two years out of college. She still lives with her old university roommate and still works at the same bookstore that she’s been with since she was a teenager. She spends her days avoiding customers, making fun of the books in the store, and counting the minutes until she can clock out. It is an increasingly unsatisfying life, but it’s also a life that she does not question. That is, until a chain of events forces Katy to confront the painful truth: she is going absolutely, positively, nowhere in life. She realizes that she needs to do something, and now.

Only one problem: Katy has absolutely, positively, no idea what the first step should be.

The other problem? From her harebrained misadventures, to her chisel-jawed boyfriend, to her best guy friend (who is not-so-secretly in love with her), Katy’s life starts mimicking the very chick literature she mocks. Only life isn’t as predictable as a storybook, a lesson Katy is forced to learn as she desperately tries to figure out her purpose in life – if such a purpose even exists.

What Inspired You to Write Your Book?
Sandra Bullock, if you can believe that! I remember reading a press release when she landed the lead role in “The Proposal” — specifically, I remember reading the synopsis. For those who don’t remember, Sandra Bullock’s main character has to pretend she is engaged to her employee (played by Ryan Reynolds) in order to avoid deportation. An eye roll and a, “Gee, I wonder how THAT movie ends!” later, I was suddenly on the train of thought that would lead me to the beginning ideas for this book. I started thinking about the formulaic nature of movies and books, and what would happen if life started mimicking them. The rest, as they say, is history.

How Did You Come up With Your Characters?
My real life factored in greatly when it came to the creation of my characters. Character adopted mannerisms and quirks of my friends, my family members, even people I met in passing. The main character’s best guy friend is essentially a combination of some of my favorite guy friends from my high school and college years.

Book Sample
When her shift ended on Wednesday, Katy hopped on the T to Ben’s apartment. After unsuccessfully attempting to open the front door, Katy rang the buzzer.
“Stepping up the security around here, huh?” Katy said to Ben when he opened the front door.
“New neighbors upstairs. Vigilant about locking the doors behind them,” Ben replied.
“Well, it’s getting a bit too cold to be waiting outside like this,” Katy continued. “It’s getting too cold, period. You’ll have to start picking me up at Porter soon.”
“Like I’d allow my spot to get taken,” Ben replied, tilting his head over to the curb where his car was parked. “Get a scarf.”
“Oh I’m definitely feeling the love here,” Katy said as she walked into the foyer and up the stairs. She turned back towards Ben as she reached the top. “But you’re paying my hospital bills if I get pneumonia.”
“Yeah, because you’re so fragile that a ten minute walk would land you in the ER.” Ben swirled his keys around his index finger before catching them in his palm. “Like I said: get a scarf.”
“Ouch,” Katy replied, moving to the side so Ben could open his door.
“Sometimes tough love is the best love.”
“You’d make a great drill instructor,” replied Katy. “So, what’s on tap for tonight?”
“Y’know, the usual. Assorted drafts, soda, water…oh you meant what the plans were.”
“If you actually had those things on tap, I’d be coming over all the time.” Katy tossed her bag into a corner and followed Ben into the kitchen.
“Speaking of which – soda?” Ben asked, opening his fridge.
“Sure,” said Katy, leaning against one of the counters.
“Any preference?”
Katy shrugged.
“Whatever you’ve got.”
“Alright, then. Previously opened Coke it is.”
“Oh, you’re hysterical. Has anyone ever told you that?”
“I tell myself that every chance I get,” Ben replied and handed Katy an unopened can.
Katy followed Ben into the living room and plopped down on his couch.
“God, I didn’t think I could get through work today,” she let out as her back hit the sofa.
Ben stood in the archway.
“That bad?”
“Nothing unusual,” said Katy. “I just don’t have the energy.”
“Now that you mention it: you looked like you were really dragging on Monday,” Ben responded, tapping his own can of soda. “Is everything all right?”
Katy leaned her head back.
“Oh, peachy keen.”
“Uh oh.” Ben raised his eyebrows. “Is there a body somewhere that I need to hide?”
“I’m just…” Katy stopped and closed her eyes. “Meh.”
“I’m sorry you’re so…’meh’,” said Ben. “Anything I can do to help?”
“No, it’s all right, I’m…” Katy trailed off. After a moment, Katy sat up, clasping her soda with both hands. “Do you think Andrea made the right choice?”
“About getting married?” Ben asked. “I guess so. I mean, she’s been beaming about it ever since she got back. I thought she was going to burst into dance yesterday, so I’m assuming she’s happy.”
“Just makes me wonder when the other shoe is going to drop.”
“Why would the other shoe drop?” Ben asked.
“Because that’s what happens in relationships,” Katy retorted. “Especially ones that seem all perfect like that at first.”
Ben paused.
“Is everything all right with you and – um – with Alex?”
Katy’s face dropped and shoulders slumped.
“What makes you say that?”
“Really?” Ben asked. “Do you want the long version or the short version?”
Katy sighed.
“Let’s go with the short.”
“That was rhetorical, you know.”
“And I’m taking it literal,” Katy replied, staring at her soda. “…you know.”
“Well, then, y’know, because I know you.” Ben tapped at the side of his can again. “Because I know you’re not one to actually talk about the issues in your personal life, even if there’s something going on, and I know under normal circumstances, you wouldn’t be this hung up on something like Andrea’s marriage.”
Katy crossed her arms.
“What makes you say I’m hung up on it?”
“You’ve been bringing it up every time Andrea is out of hearing range.”
“Oh.”
“So I repeat: is everything okay?”
Katy leaned back on the couch.
“Meh.”
“Again, I’m sorry things are ‘meh’,” said Ben. “You know…I’m always here if you ever need me. I might even be able to give you some helpful male insight.”
“Your vagina begs to differ.”
“Oh now that’s just mean,” Ben replied. “My vagina would totally agree that I’m great at giving the male perspective.”
Katy’s grin lifted her cheeks towards her eyes. She sat back and sighed.
“I think I can handle a meh situation on my own, but if it gets past meh, you’ll be the first one I call.”
“Hey, that’s what I’m here for.” Ben flashed a toothy smile.
Katy stretched out.
“I’m glad that you’re the level-headed one. God knows where I’d be without you.”
“Hiding dead bodies all by yourself, is where,” Ben replied, still standing across the living room and under the arch.