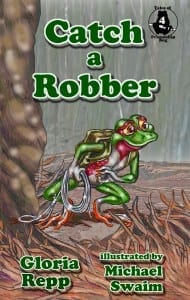 This book is bargain priced from 04/09/2014 until 04/15/2014 Skitter the Lizard, Pibbin’s friend, has been jailed by the rabbits. He is sure that she didn’t take their necklace, but the rabbits demand proof! When they suspect that Skitter’s cousin is the thief, Pibbin, Leeper, and Nisk set off to track her down. The trail leads them toward Shadow Swamp and into a strange land of super-sized creatures. They’re far from Friendship Bog, and Pibbin is hoping they won’t run into the monster of … END_OF_DOCUMENT_TOKEN_TO_BE_REPLACED 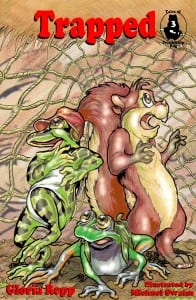 Pibbin the treefrog's latest project—passing out Cookie Fest invitations so he can earn a star—gets sidelined when he decides to help a squirrel friend track down his missing brother. He’ll need a team to solve the puzzles and search the booby-trapped tunnel, but he swallows his fears, along with a few tasty ants, and sets out to do his best. Book 3 in TALES OF FRIENDSHIP BOG. EBook: full-color illustrations, map, and reference color photos of frogs. Targeted Age Group: Ages 7 and … END_OF_DOCUMENT_TOKEN_TO_BE_REPLACED